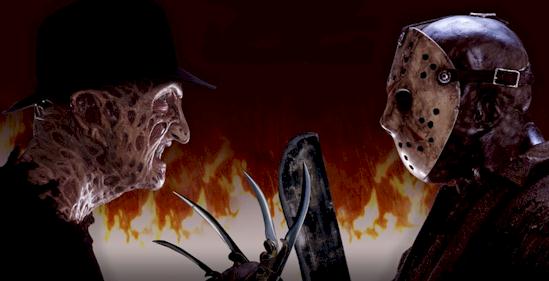 Take a good look at any given horror movie and what is the first thing that comes to mind… ya know, aside from severed heads and fire-hoses full of spurting blood. That’s right: weapons! Be them sharp, heavy, spiked, attached to chains, or actively on fire, frequently the weapon makes the killer. What would any decent serial killer be without some kind of implement to exact his gory, wicked revenge? Well, pretty stupid and not nearly as scary or half as effective, that’s what! Above and beyond that, it’s nearly impossible to flay a victim to get to his or her sweet, sweet entrails with a ball of yarn. So, to that end, one needs to claim a device of their own to really get to the blood and guts of the matter (Ha! Rimshot). So, let’s explore the vast and varied realm of of the horror movie weapon, and try not to fall behind along the way lest you get systematically butchered. It’ll be fun!

Quite possibly the most well known in murderous cutlery are the sharpened, pointy, razor-esque tools of the trade. Knives and assorted blades are quick, clean, and tend to cause the most body fluid-extracting mayhem resulting in that ever popular gush of the red stuff so richly desired by today’s killers-on-the-go. So, you might be asking yourself, which cutting apparatus is currently being employed by all the famous butchers today? Well, I’ll show you!

A. The Butcher Knife – Most famous usurper: Michael Myers

Now that’s effective! Anyone else daydream about shoving a 10-inch chef’s knife into Jamie Lee Curtis’ gut? No?

B. The Straight Razor – Most colorful antagonist: Sweeney Todd

That just might be the only clear and humane way to get rid of Sasha Cohen. Oh SNAP!

C. Four-Razor Glove – The only man for the job: Freddy Krueger

Though not employed in every occasion, the gloves are so iconic all he has to do is wear them for their frightening effectiveness. I know I’m scared. A little.

D. The Sword – Best use of the weapon: Blade

When you’re out and about vampire hunting, put aside the slow and mediocre whip and garlic and grab yourself a nice, tricked-out Samurai Sword.

When the slow, far-too-personal approach to the static cutting weapon is just too, well personal, it’s time to ditch that mess and head for something with a bit more horse-power! You need gas powered, you need fast-acting, and you need it now. There’s no better weapon that the one that can dispatch a slew of victims in a matter of seconds.

A. The Chainsaw – The master of disaster: Leatherface

When the movie is titled Texas Chainsaw Massacre, I can assure you you aren’t going to see a wild and woolly spelling bee.

B. The Lawnmower – The man with the plan: Lionel Cosgrove

The Film: Dead Alive (Braindead). The Director: Peter Jackson. The pissed off protagonist versus a house-full of the undead: Lionel. Queue the lawnmower.

C. A Drill – The most popular antagonist: The Driller Killer

What do you do when life seems to hand you nothing but a bowl of lemons? Why, make lemonade, of course? And with a drill!

D. An Industrial Laundry Press – The mechanical menace: The Mangler

Nothing screams bloody murder like an inanimate clothes-folding apparatus! Nothing! Okay, well, ‘nothing’ is a strong word.

Perhaps the most effective yet somehow the least used is the weapon you’d think every killer would want to invest in: A Gun! I mean, they are, after all, murderers and harbingers of death, I can’t imagine it being that hard to smash out a gun shop window and load for bear. Oh well. However, a few have. And here they are.

A. The ‘Boomstick’ – The bad-ass wicked wielder: Ash

Ya know, as much as I appreciate Sam Raimi’s love for all things Spider-Man, I really think it’s high time he gave us another Evil Dead flick chock-full of Bruce Campbell. Now, please.

B. The Harpoon Gun – Master of a million weapons: Jason Voorhees

Yes, technically I could have put Jason literally under any one of these headings, but there’s just something so satisfying about an unstoppable juggernaut kinda taking the lazy approach and just shooting you a la Indiana Jones in Raiders of the Lost Ark. Precious.

Okay, I suppose one could argue that this is a Sci-Fi flick, but I disagree considering Talec’s C.D. gun splits a couple of cats apart quite nastily. I call that horror, son!

Clowns are way scary enough without having ‘K’s in their name and being from another planet, but it certainly makes it that much worse when they can cocoon you in Killer Kotton Kandy. I have to go now.

Though sort of a vague category, they all do fall into a Jeopardy-esqu ‘Things You Might Find On A Haunted Tool Peg-Board’. These weapons of mass carnage are both brutal and incredibly effective when it comes to their scare factor and clever usage. I ask you, what’s more frightening; a boring old machete or a huge room full of rusty, living razor wire. Yeah, thought so.

A. The Rusty Hook – The dude with one wedged in his hand-stump: Candyman

This scene is so cool you don’t even need to see the hook to know it’s plunged deeply into the doctor’s spine. Now that’s film making.

B. The Razor-Wire Chain – Our Hellish fiend: Pinhead

Moral of this story: Pinhead does NOT mess around.

C. The Ball – The playful purveyor of pain: The Tall Man

I assure you there is absolutely no point in running from a self-aware steel ball full of Swiss Army attachments. No point at all.

Now here, finally, we have a collection of horror weaponry so downright moronic that it would either take a desperate and sadistic individual to even come up with them (natch), or else a damn genius. Whichever way you look at it, these methods with which the killers exact their horrific revenge are really, really stupid. Effective, but incredibly stupid.

A. Killer Pogo Stick – Not at all surprisingly, our antagonist: The Leprechaun

This is the time where words ultimately fail me.

B. Death By Root Vegetable – ‘Chill’ out, the scene is coming (ha!): Jack Frost

Okay, so technically Shannon Elizabeth isn’t dead, but she sure as Hell wishes she were.

C. Gettin’ A Game Of Hoops Goin’ – And one: Kristy Swanson

Throw Mama From The PAIN! HA! Get it?

I don’t care if Gremlins is considered a horror movie -and it is- watching Mrs. Deagle fly out of the roof like that is hysterical.

So there you have it: the myriad ways you, too, can come to a bloody, shredded end in many of the most popular and famous horror movies! Oh, and there’s still ground left uncovered like axes, nefarious traps, and torture! I just don’t see any way to survive fully unscathed in horror flicks these days. Oh well, I guess I need to find something to do with this spiked bat.