By Jeffery Mitchell on February 9th, 2014 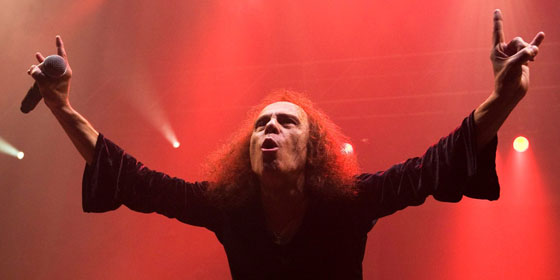 There are very few artists who can attest to having made quite as large a splash in their own genre as Ronnie James Dio. In the metal community, he’s quite literally worshiped as a GOD. We’re talking full-fledged goat sacrifice, circle-of-salt, upside-down-cross, hooded-cloak, bloody-dagger-in-hand kind of worship, here. 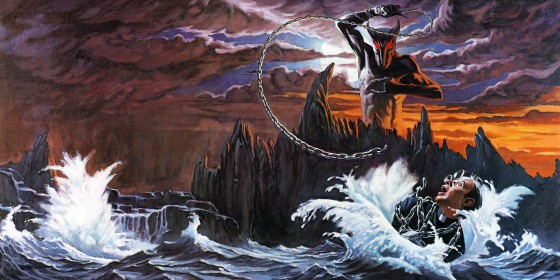 But no amount of worship can make a terrible music video vanish into thin air… That’s right, we’re ripping into one of Dio’s early videos; the same way his own worshipers might rip into animals on sacrificial altars. It’s Holy Diver!

It begins with branches…

Lots and lots of branches. Seriously, the first 20 seconds might inspire you to paint a forest scene or plant a tree or something; it’s pretty weird. Then, BAM! The song’s heavy riff springs to life, snatching your wandering mind from the soothing embrace of the images of nature you had been admiring and plummeting you into a plague-stricken chapel of some sort (how’s that for contrast?) where Dio is just beginning his latest EPIC quest.

He enters the place, sword in hand, and slays the first slack-jawed hunchback he lays his eyes on cause he damn well pleases.

As the dude with the paper bag on his head falls slowly to the ground with a look of “WTF’d you do that for?” on his face, Dio proceeds to a nearby door from whence beckons a blinding light.

Here, a close-up of Dio’s head flashes onto the screen with what appears to be the lake of fire ebbing and crackling behind him. A good, close look at our hero’s face reveals to us the fact that we’d rather not be having such a good, close look at him. It also helps to remind us that we are indeed watching a MUSIC video.

The adventure continues with Dio stepping (or rather, smacking into a wall, THEN stepping) forth into a forge, or smithery, or whatever. Basically, there’s a large shirtless dude in a sado-mask and the medieval equivalent of a dickie pounding away… at a sword that he cools off in a bucket of water just in time for Dio, whom he tosses it to without so much as a questioning look (he mostly just looks disappointed with the situation and his own life in general).

The next scene features Dio advancing fearlessly through a dungeon armed with his shiny new sword. Words can hardly describe the 10 seconds he spends slow-prancing his way down a dank corridor, moving his sword from side to side as though his arms are prosthetic attachments to his body that he’s learning to control with his mind for the first time.

A final shot of Dio attempting to stab the heavens brings us to an image of three satanic mages sitting on what is presumably a park bench with their hoods concealing their faces and an effects tarp stretched behind them. After a few moments we’re shown some close-ups of them with the effects of the tarp fully activated. The weird cardboard cutout they’ve been throwing on the screen throughout the video makes an appearance in front of an erupting volcano in the background. Then one of the mages lifts their head to reveal a rather hideous set of cat eyes that look both completely retarded/fake and demented/terrifying.

The plague is back

Back in the plague-stricken chapel (that Dio has apparently returned to), bodies writhe in mortal pain and our hero advances; holding his new sword in both hands as though one side weren’t made to CUT PEOPLE.