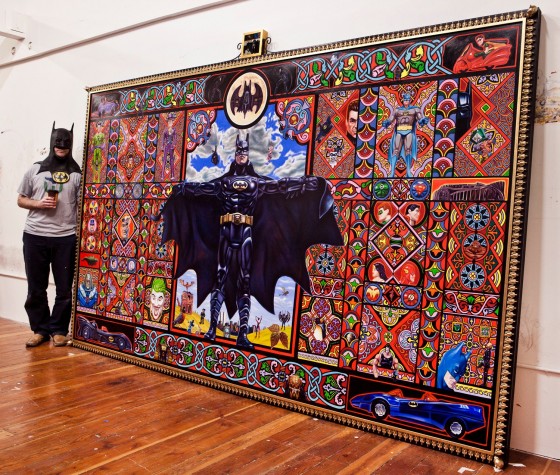 About a year ago we brought you a feature on Robert Burden’s amazing pop-culture painting collection, Toy Box. Burden has continued to expand his gallery of amazing paintings, including “The Holy Batman” which is shown to scale above. He even made 360 little Batman figurines as ornamentation for the frame. You can find some detailed images of this masterpiece below :

If you’d like to see “The Holy Batman” and 15 more from his fabulous collection, you’ll have your chance at a new exhibit opening this weekend in San Francisco: 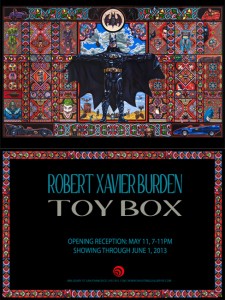 Toy Box will consist of 16 oil paintings both on canvas and on panel, all of which place childhood icons into compositions of reverence and majesty. Backdrops that appear like ecclesiastical stained glass or elaborately woven rugs from afar reveal something different at closer view; characters once only at home in comics and cartoons are crossing over into the realms of oil portraits with the help of Burden’s imaginative eye and deft detailing.

This exhibit features 8 completely new pieces that include a bit of taxidermy. Each frame includes an encased animal which corresponds to the painted character. Check them out below :

His latest work (which will also be featured at the gallery show) has just been released, “The Autobot.” You’ll surely recognize Optimus Prime in this 11 foot tall by 7 foot wide masterpiece. Of course this isn’t exactly the Optimus you remember from the movies or even TV, this is a representation of the toy, which is included at the bottom of the frame : 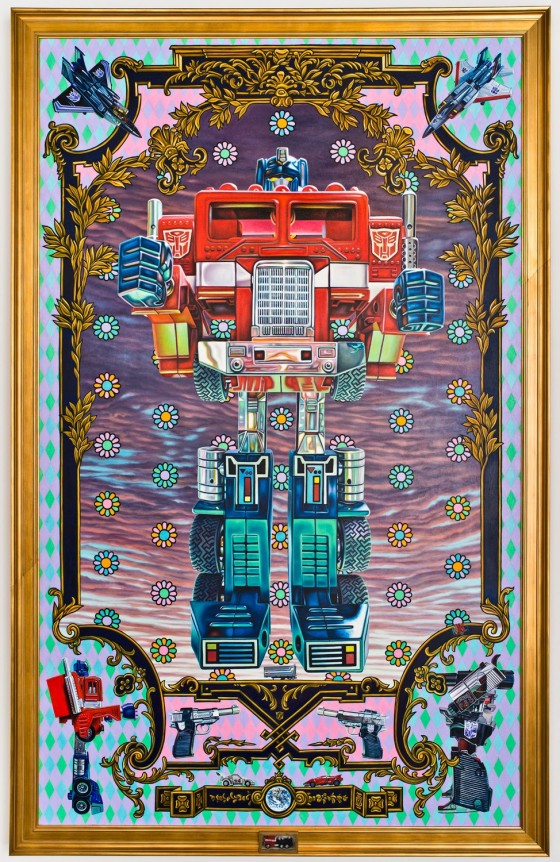 For much more on Burden’s motivation and inspiration, check out his awesome interview over at Wired.com.