Robert Sacre had a Rough Night 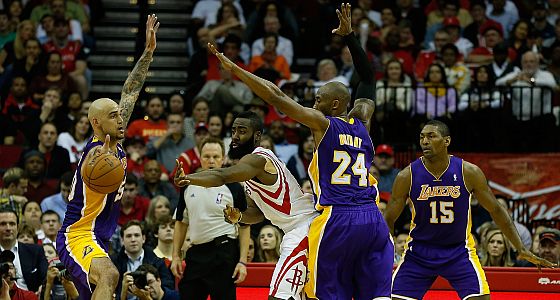 The Lakers struggles this season have been well documented, with the team off to a 15-19 start and on their second coach of the season. It didn’t get much better for Los Angeles last night, as a shorthanded Lakers team was humiliated by the 21-14 Houston Rockets. On the receiving end of most of the grief was rookie Robert Sacre, who was on the receiving end of three highlight reel plays.

The first to take advantage of Sacre was James Harden, who went through the former D-Leaguer for a power slam late in the third quarter.

Next up was free agent pickup Jeremy Lin, who went over Sacre for a three point play that left the rookie wishing that Pau Gasol was still healthy.

Not content with going through and over Sacre, the Rockets closed out their win with one last bit of humiliation. Harden, spotting a free Marcus Morris, went between Sacre’s legs for a quick two.

We’re guess that Sacre is back on the bus to the D League, if not Canada, by the end of the week.