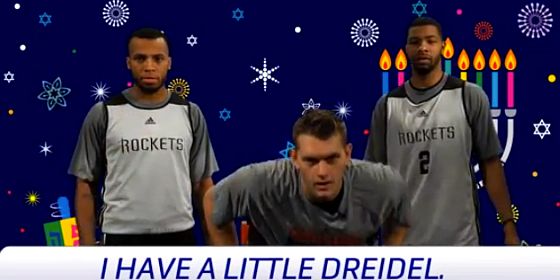 While many teams record Christmas greetings this time of year (and we will be bringing you those next week) one NBA team has reached out to their Jewish fans with a Hanukkah video. Surprisingly it wasn’t a team from New York or LA, but from Houston, who decided to release a video of their stars singing the Dreidel song. We have to applaud them for the effort, but reserve the right to criticize their singing. It was a fine attempt, but the “deer in the headlights” karaoke star gave away the fact that none of them new the words.

The Rockets’ video did bring back memories of our favorite NBA Hanukkah video, when Kobe, Shaq and the rest of the NBA sent holiday greetings to their Jewish fans in 2008.