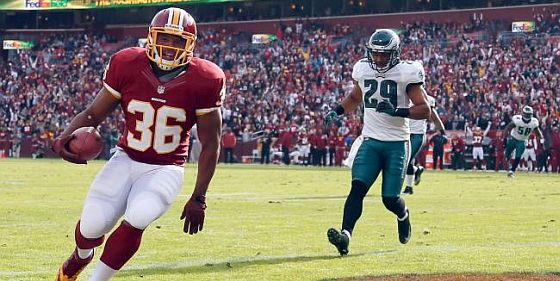 Dominique Rodgers-Cromartie is a dirty player. When he saw Robert Griffin III coming at him in the open field on Sunday Rodgers-Cromartie, in violation of multiple league rules, launched himself head first at the Redskins QB. While he failed to connect, his attempted hit on RG3 should earn Rodgers-Cromartie an extended suspension from commissioner Roger Goodell.

While we have been outspoken critics of Goodell’s punishment of players, Rodgers-Cromartie showed a disregard for both his and Griffin’s safety that merits immediate and severe actions. While the resulting whiff led to a comical whiff, and no damage to the player, his failure shouldn’t mitigate the potential danger in his action. Rodgers-Cromartie not only aimed for an opponents head, but he did so with his own helmet while launching himself, all violations of league rules.

This isn’t the first time that Rodgers-Cromartie has been caught launching himself at an opponent. During the preseason he was penalized for going shoulder first at the chin of Steelers QB Byron Leftwich. While he got away with a moderate fine for that hit, this second attempt proves he learned nothing and that a harsher punishment is required. While for the second time the opposing QB walked away without injury, Rodgers-Cromartie does not deserve to be rewarded for his incompetence. With the league under fire for not doing enough to prevent head injuries, Goodell must act immediately to show head hunting is not tolerated.