Sports > Football > Roethlisberger’s Knee Was Not Down

Roethlisberger’s Knee Was Not Down 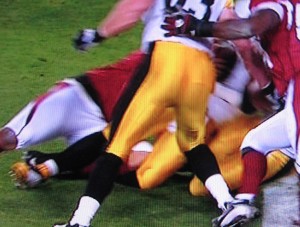 Ben Roethlisberger just scored a Touchdown on the opening drive of the Super Bowl, and they took it away after a video review. To the left is a photo I took from the NBC replay. They were inferring that this angle showed Ben’s knee down, and the ball not touching the goal line. However this photo does not show Ben’s knee down. It was off the ground, and their is a shadow below his knee to prove it. In the full motion video (below) you can see that Roethlisberger’s knee never touched, and immediately after this photo, he was flipped over and crossed the goal line. It looks like the first bad call has gone against the Pittsburgh Steelers in this game.