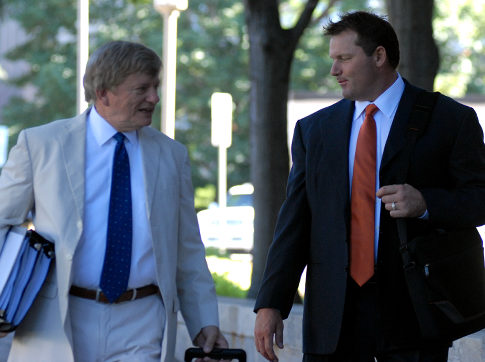 On the baseball field, former Major League Baseball pitcher Roger Clemens was in full control of how he wanted to pitch and prevent batters from getting on-base. However, when the diamond turns into a court room, Clemens has a little less control of what goes on. Clemens stands trial for lying to the US Congress about his use of performance enhancing drugs when playing in the Major Leagues.

If Clemens were convicted, there was a possibility that he could serve up to thirty years in prison for his actions. However it appears that he might be in the clear as a blunder from the prosecution might get the case dropped altogether and has caused a mistrial of this case.

It all revolves around Andy Pettite’s wife. Back when the congressional hearings were going on pitcher and friend Andy Pettite stated that he was told by Clemens that he had used performance-enhancing drugs back in 2000 and had mentioned it to his wife in passing during another conversation. The prosecution had planned on possibly calling Pettite’s wife to the stand to recount the possible conversation that they had but U.S. District Judge Reggie Walton told the prosecution that he would not allow anyone that could possibly call the credibility of any of the key witnesses into question.

However, during day two of testimony, a video shown by the prosecution clearly shows a transcript of comments made by U.S. representative Elijah Cummings discussing Pettite’s wife and testimony in dealing with the possibility that Pettite wasn’t a credible witness. This blunder caused Judge Walton to automatically call for a mistrial of the case and has set a date for future trial if there is one.

What does this mean for Clemens? Right now, he’s pretty much a free man and will have to wait till September for a ruling to be made if their will be a possible second trial. There is a distinct possibility that there will not be a second trial due to the legal ruling of double jeopardy that protects individuals from being tried twice on similar charges. To put this in baseball terms, Clemens won the game after a base-running error caused the final out of the game.

The Roger Clemens trial appeared to be one of the highest-profile sports related court cases in recent memory but it appears that “The Rocket” had dodged the bullet for now at least.