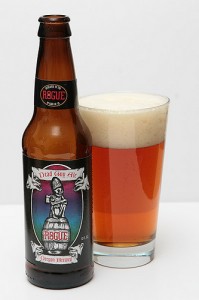 What Rogue Says:  Style: German Maibock; Food Pairing: Pork, Spicy.  In the style of a German Maibock, using our proprietary Pacman ale yeast. Deep honey in color with a malty aroma and a rich hearty flavor.

For anyone (like your humble reviewer) who has been a fan of micro brews for a while, you’ve surely seen a Rogue beer in your local package or grocery store. I’ve had a Rogue beer or 10 in my day, but never really stopped to consider it–if that makes a lick of sense. So when scanning the case for my latest review (translation: excuse to drink beer in my abode), I saw the 6 pack of Rogue Dead Guy Ale. Part of the charm of this beer is its label–with the little skeleton dude perched upon a barrel of presumably, uh, ale–which as noted by Rogue’s website, was quite a hit with Deadheads after the beer was originally released in the early 1990’s. I knew I’d passed over this brew several times–mainly because it broke the dreaded $10 threshold for a six pack. (Never mind that I won’t hesitate to spend $9.99 on a good sixer, there’s just something about the sticker shock of ten bones for me.) But I digress…So I grabbed the Dead Guy and headed home. And quite honestly, for the price, I’ve had much better ale. Don’t misunderstand, it was a good beer, but not $10 good. The ale was very smooth, easy to drink, light and crisp with a great sort of a hazy or fuzzy look to it. It almost had a sweet after taste, with just a very minuscule touch of bitterness. Honestly, there’s not much more to it other than being a good, solid little ale–not very robust, I’d say. It would be a solid choice for an every day sort of a beer if not for the cost factor.

Rating: * *  1/2
Again, perhaps it’s unfair to truly grade this beer ‘average’ but based on it’s ‘bang for the buck’ factor, it’s squarely deserving of this rating.  Pretty nice beer, just not for the dinero.