So now you’ve seen “Rogue One”, the first stand-alone “Star Wars” film. It’s another year until Episode VIII. What the hell are you supposed to do until then???

We suppose the first thing would be to watch Rogue One again. This installment is directed by Gareth Edwards, the guy behind Monsters and the Godzilla movie that got it right. Here he gets it right, too…though having just digested Episode VII (a year feels like yesterday), our minds are still reeling like a one-winged Tie-Fighter. 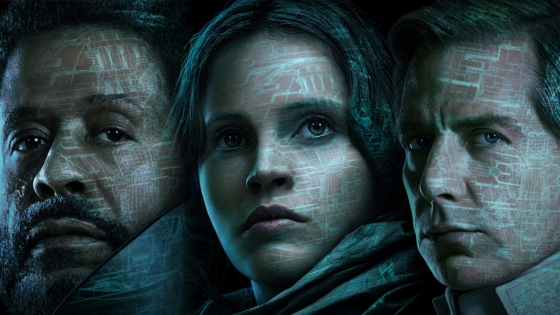 Sure, we know that the story is essentially a precursor to 1977’s Episode IV (and if you don’t know that by now, then you probably don’t care), but it actually and quite brilliantly explains a lot about the original film. We won’t elaborate on the plot beyond the general premise: a ragtag bunch including Jyn Erso (Felicity Jones), who is the wayward daughter of an ex-Imperial scientist (Mads Mikkelsen), a Rebel pilot/assassin named Cassian (Diego Luna), and fearless blind peacekeeper Chirrut (Donnie Yen) come together with a handful of other freedom fighters in order to steal the plans for the Death Star. The movie provides a more steady stream of action than any of its “official” brethren—the second half especially resembling a straight-up war movie—but it is far more than just a means to an end.

So, what can we talk about without revealing anything too important? There are some surprises, not to be spoiled here. The sets, outfits, weapons and technology are all faithful to the original film—from the X-wings to the Star Destroyers to those ridiculously large and unnecessary helmets on those guys at the Imperial switchboard. Seriously, are there a lot of falling objects around there? We digress. It’s surreal and nostalgic to see a ship with a console that looks like an Atari 2600. We love it, it’s like we’re six again.

But the film also has its own distinct personality, distinguished in part by the score from very busy composer Michael Giacchino and notably more breakneck pace. That’s because Rogue One exists primarily to depict the melee that occurred just prior to A New Hope (Editor’s note: on second viewing, be sure to keep track of how many times screenwriters Chris Weitz and Tony Gilroy use the word “hope”). That said, it gave us exactly what we wanted. Most importantly, Rogue One finally answers the big question : How do you blow up the Death Star with just a single blast from an X-Wing?

Though the Force is always with us, the Jedi are not an integral component of the storyline; the film focuses more on blasters than light sabers. It’s really the Faith in the Force that drives these characters. Especially Yen, who, with just a  bō staff, confirms that Stormtrooper armor is indeed useless.

Casting is great. Felicty Jones and Diego Luna are ideal in the primary roles; Alan Tudyk voices droid sidekick/comic relief K-2SO, and Forest Whitaker plays a dangerous extremist that sides neither with the Empire nor the Rebellion (nice to have a third choice, though). Ben Mendelsohn plays the evil Death Star foreman who reports to Lord you know who.

The impromptu blitzkrieg on Imperial soil is the most spectacular and ferocious Star Wars battle sequence ever filmed; thank you, director Edwards, DP Greig Fraser and editors John Gilroy, Colin Goudie and Jabez Olssen for nailing this one. We went in wondering a lot about how Edwards was going to approach such precious material, all the way down to the opening credits, not only because of where the film falls in the saga’s timeline, but because it will likely set a precedent for the inevitable expansion of the cinematic universe. After all, this is our childhood we’re talking about. We’ll leave it up to your imagination until Friday.

Rogue One : A Star Wars Story

A more steady stream of action than any of its “official” brethren—the second half especially resembling a straight-up war movie—but it is far more than just a means to an end.