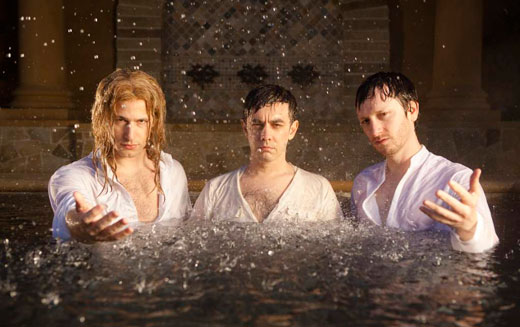 ROKK Vodka and the guys that brought you “I’m on a boat” are teaming up to bring you some good times with great vodka and hilarious videos. The Lonely Island: Andy Samberg, Akiva Schaffer and Jorma Taccone have been working on some sweet videos that are right on par with their previous videos from Saturday Night Live. Andy, Akiva, and Jorma are bringing their talents to the advertising world as “creative directors” of Rokk Vodka.

When asked about their new venture into the advertising world Andy Samberg said, “Most people ask us to just make videos, but Diageo asked us to be Creative Directors, which sounded fancier. Anyone who’s seen our videos knows we’re fancy guys, so we said yes. And they also gave us a bunch of ROKK Vodka, which we enjoy drinking with our mouths.” The guys will be adding more throughout the year. For more info on what the “Creative Directors” will doing check out ROKK’s website and Facebook page. Check out their latest video below called “Dream” :