Rolex 24 at Daytona with Mazda Motorsports 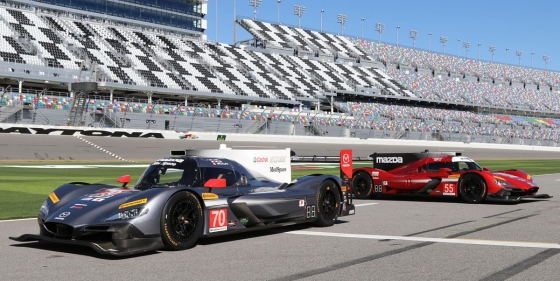 Recently we were invited by our friends at Mazda to see their cars compete in the Rolex 24 at Daytona International Speedway. We’ve been to a variety of awesome automotive races over the years here at Gunaxin: Texas 500, Red Bull GRC, Pirelli World Challenge, Red Bull Frozen Rush, Brickyard 400, Baltimore Grand Prix, and more. The Rolex 24 was like nothing we’ve even seen before, and left us with a greater appreciation for the cars, the drivers and their crews.

The 55th Rolex 24 at Daytona was contested from 2:30 PM on January 28th till 2:30 PM on January 29th. It is run on a 3.56 mile combined road course, utilizing portions of the NASCAR tri-oval and an infield road course. To give you some perspective on the epic nature of this race, the winning car completed 659 laps. That is 2,346 miles, at a 24-hour average of 97.7 miles per hour. Of course they’re driving faster than that, once you figure in pit stops and driver changes. Did we mention that it rained for over half of the race? 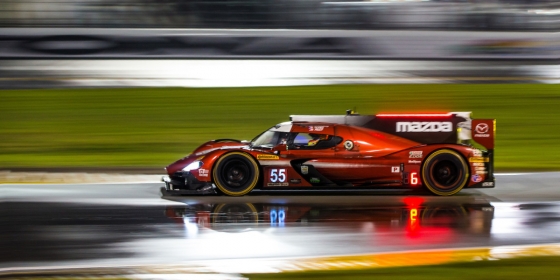 We can’t imagine the level of concentration and skill required from drivers to keep their car on the track over the length of a three-hour shift. Between their helmet and the car itself, they already have minimal visibility, and then you add the dark and the rain to that equation, and just avoiding constant wrecks is an impressive feat in itself. Throughout the length of the race, we saw Mazda’s drivers visit the hospitality tent for a break and some pasta, before they’d depart again to wait in the Pit for their next turn behind the wheel. Endurance racing is far from just a mental challenge however. 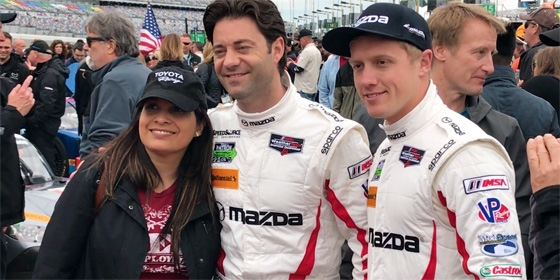 “You can’t just train for two weeks to be in shape for the 24,” said Joel Miller. “It has to be your lifestyle and months of training. The third and fourth stints, usually in the wee hours of the morning, are really where fatigue can set in. You can’t make mental mistakes or get burnt out physically. That’s when you see the drivers who are in the best condition are going to have that reserve of energy that will take them to the front.”

Assuming the drivers can keep the car on the track and out of wrecks, it still technically has to be capable of finishing the grueling 24-hour test. Unfortunately for Mazda, neither of their new prototypes were running when the clock struck :00 at this year’s race. As you can imagine in a race of such length in wet conditions, there was no shortage of technical issues confronting every team. The racing début of Mazda Motorsports‘ pair of RT24-P Prototypes saw them complete 1000 laps combined but was plagued by some bad luck. The team worked valiantly throughout the night to keep their cars on the track. 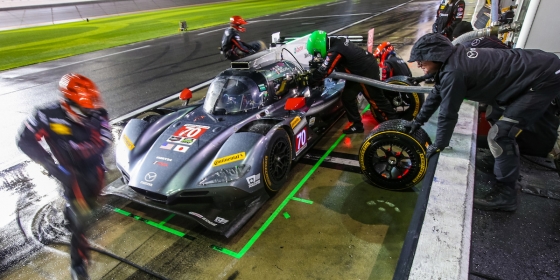 “It was incredible. You didn’t know what to expect,” commented Tom Long. “Between nice, dry conditions with sunny skies to start the race and then overnight we dealt with pretty heavy rain. We experienced cold tires with zero grip. Then, by the end, our Mazda had a ton of grip as we were running the best laps we had run all weekend. The crew guys just never stopped challenging. Man, they stuck in it the whole time with all of the things we worked through. It’s a tough deal: we could taste the finish. We were right there. It leaves a taste we don’t want the next time.”

Our own track experience wasn’t as grueling as the race team, but we did spend three awesome days at Daytona International Speedway. On the first day we watched as three Mazda MX-5 race-cars competed in the 4-hour BMW Endurance Challenge, the season opening race of the IMSA Continental Tire SportsCar Challenge. Despite a track that is definitely not suited for the MX-5’s strengths, all three Mazda cars finished in the Top Ten.

Saturday was our longest day, as the Rolex 24 began and we stayed at the track for over half the race, departing after 3:00 AM. On Sunday we returned to the track to watch the conclusion of the race. All the while we were recording the action and scenes on video, and have put together this highlight film to share the experience with you. Enjoy.

…and here is an additional video featuring much more Mazda specific detail, produced by MZRacing Channel :