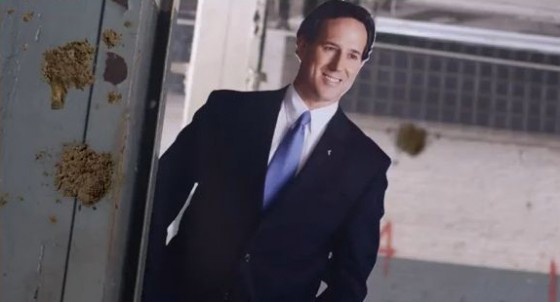 ‘Tis the season for Republican presidential hopefuls to launch vicious attacks to help discredit their opponents. Taking center stage in this battle of nitwits is Rick Santorum and Mitt Romney. The former’s latest assault on the Mormonator features a Romney impersonator taking dead aim at a Santorum cut-out using a machine gun loaded with a thick brown substance we’re supposed to believe is mud, but considering Ricky boy’s not so flattering internet nickname, could easily be construed as something else.

Either Santorum has a well-hidden sense of humor, or he’s a complete moron not to notice the irony of this ad. I’m going with moron.

[Via The Daily What]