Ron Artest Blames it on the Ah-ah-ah-alcohol

Remember when we thought that Ron Artest couldn’t get any more entertaining?  And by entertaining, we of course mean batshit insane and terrifying?  Short of going full on Rodman, coloring his hair like a rainbow and wearing women’s clothing it seemed just about impossible that he could top his previous antics. 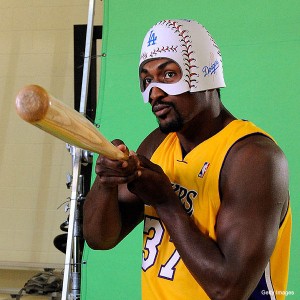 We hear he goes out and fights crime in this outfit.

Well, it turns out that old Ron Ron is the gift that keeps on giving.

Artest, who is in his first season with the Lakers and who despite being a tremendous athlete is best known for beating up fans in Detroit, admitted in an interview with The Sporting News that he used to drink Hennessey at halftime of games.  He didn’t sneak it, either.  He just had a bottle of Henny sitting in his locker and he’d slug it when the team went into the locker room at the end of the first half.

So far, he’s saying that this happened only in his first three seasons with Chicago (uh, sure it did, Ron, sure it did), though he does have a pretty solid explanation:

I was a single pimp!

Seems reasonable enough to us.  It also puts into perspective the incident that sparked the now famous Malice at the Palace event we alluded to earlier.  Maybe, just maybe, the guy who threw a beer at Artest was just being considerate, knowing Ron’s love of booze, and Ron went into the stands to thank him!  Yeah, yeah, that’s it! 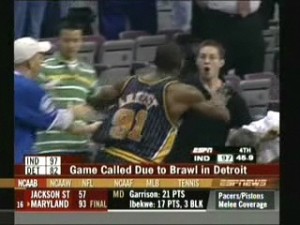