Sports > Baseball > Root Against the Yankees

Root Against the Yankees 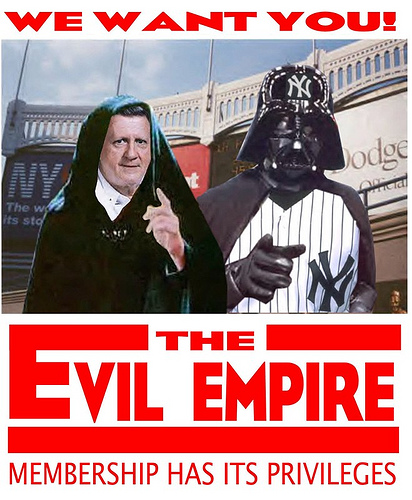 The big mystery of the baseball playoffs is: why the hell would you root for the Yankees?  Ever?  Even if you were from New York?

They are, and have been for a while, a team motivated almost entirely by pure greed.  Why’d they knock over the old Yankee Stadium and build a new one?  To have seats with ass-warmers that cost thousands of dollars.  Why is pretty much anybody on the team?  Because George Steinbrenner kept upping the contract offer until they couldn’t say no. 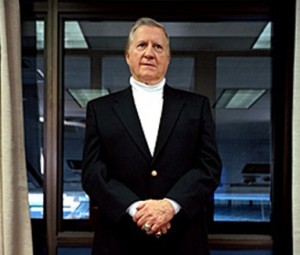 I'll make him an offer he can't refuse.

To make it worse, Steinbrenner’s choices are motivated almost entirely by who’ll put asses in seats instead of being a decent ballplayer.  Want to know why damn near every baseball player you’ve ever heard of goes to the Yankees eventually?  Because you’ve heard of them, and screw how well they actually do, you’ll show up just to say you saw them play.  This is why it took them six games to beat the Angels, which we’re pretty sure is run by a Soviet-era bureaucracy or something, they’re that badly managed.

We’d forgive it if the team were at least cuddly, but they’re not.  Who’s their most famous player?  Alex Rodriguez, whose big achievement before now was being lame-ass until fall every year, cheating on his wife, and starring in a razor campaign that seemed geared to ensure that he was seen as the biggest douchebag in baseball.  Seriously, look at this shit:

OK, it's not a razor ad. But still, whatta douche.

He makes Barry Bonds look like Mother Theresa.  Pair him with Jeter in an ad and you’d have a douchebag apocalypse.

Not so these losers.  The Bleacher Creature we’re pretty sure will crap on your windshield and burn down your house if you say anything bad about their beloved team.  Spending any time around these idiots is like being trapped in a Star Wars chatroom, except the nerds in question have thick accents, are violently drunk, and even more obsessive about minor details.  Bleacher Creatures are the reason the entire nation pointed and laughed at the Yankees in 2004 when the Red Sox gave them the four-game bitch slap heard ‘round the world.  They’re the reason nobody felt bad the Yankees lost the series in 2001, even AFTER 9/11.  People, even good, decent people, hate these fans so much that they want to see them cry.

And the team actually supports these raging douchebags!  Even the Red Sox have the decency to tell Red Sox Nation to shut the hell up and act like adults once in a while, but Steinbrenner sees the Bleacher Creature as somebody he can squeeze for every last buck, and as long as they pay, anything goes.  Yeah, any sports team is going to have ignorant, asshole fans, but only Bleacher Creatures take to the level where a dislike of the fans actually translates into a dislike of the team.  These dipshits actually tried to saddle the Red Sox with the “Evil Empire” name because they actually won two Series, and the Yankees hadn’t won any despite their bloated payroll, and try to claim that the Yankees are the greatest American sports franchise ever.

Not while these guys are around, you idiots.

And that’s really why we’re rooting for the Phillies.  Not just because we like the team, but because their opponents define pretty much everything a decent human being hates about professional sports.  Also we’re pretty sure somebody’s going to drill A-Rod, and that we won’t want to miss.