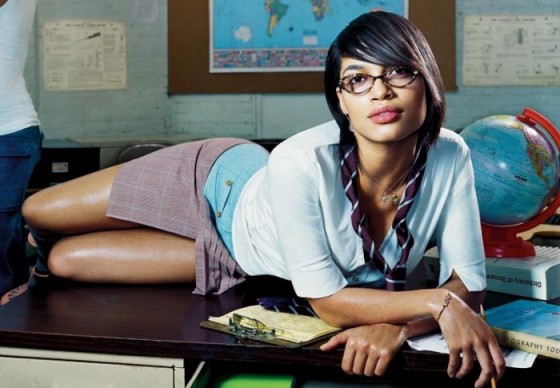 I’ve been a card-carrying member of the Rosario Dawson fan club since she played Ed Norton’s girlfriend, Naturelle, in Spike Lee’s vastly underrated 25th Hour. And not just for superficial reasons (ahem, big breasts) either. She’s a decent actress and comes across as one of those mythical “cool chicks” authors and screenwriters are always putting on pedestals in works of fiction. At any rate, Ms. Dawson co-wrote a graphic novel (wait, what?) called O.C.T., which stands for Occult Crimes Taskforce, that’s being developed into a series at A&E. Hmm… I’m intrigued. Tell me more, Hollywood Reporter.

The scripted drama, an increasingly appealing genre for the cable network, will explore the inner workings of the task force, which was established after the Civil War to make the New York City streets safe from practitioners of black magic, demons from another dimension and all manner of supernatural malcontents.

I guess the rest of America’s cities and towns aren’t hip enough for practitioners of black magic and interdimensional beasties. No matter, I’m still on board.

Like the graphic novel, co-created by Dawson and David Atchison, O.C.T. will center on the character of Sophia Ortiz, a new member of the bureau who uses magic, spells, ghosts, the undead and the unnatural. At the heart of the story is an ongoing struggle between the O.C.T. detectives and an organized demon-force attempting to take over Manhattan.

SOOOOOOOOOO, it’s Charmed meets Supernatural with a dash of Torchwood thrown in for good measure. I’ll totally watch this, especially if Rosario plays the lead. Gale Anne Hurd, who helped bring The Walking Dead to the small screen, will be one of the producers, which bodes well.

Of course this provides me a perfect opportunity to share my favorite Rosario scene from Kevin Smith’s Clerks 2. You’re welcome.