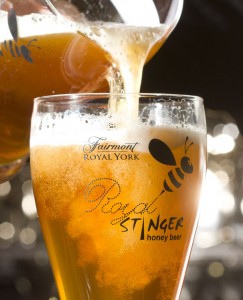 It’s January, it’s Canada, it’s cold. So how does a Canuck survive? Finding a strong ale to slowly warm you from the inside out. Three million bees have a lofty perch on the roof of the Fairmont Royal York Hotel in downtown Toronto, resulting in the hotel’s own source of honey. Partnering with local indie brewery Mill Street, the two have concocted a limited edition ale made with the sweet rooftop elixir – the Royal York Stinger.

A warm amber colour, the unpasteurized beer comes straight from keg to cold pint glass (its only available by draught). A deep whiff of this brew, distinct malty grain and a slight sweetness hits the nose, thanks to the brewmaster adding honey after aging. Royal Stinger is bubbly and creamy, with a strong taste of barley malt and a slow finish on the palate. The thickness of this ale coats the throat, leaving a warm path as it flows inside and kicks up the inner thermostat. With such a long taste on the tongue, this isn’t a beer to be pounded back, but to be savoured with friends, especially when temperatures are below zero.

By Waheeda Harris of Gone to Swan