Ryan Reynolds is the Green Lantern 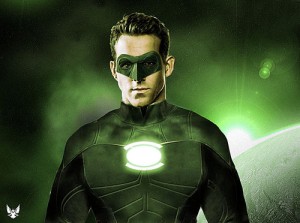 Variety is reporting that Ryan Reynolds has been cast as Hal Jordan a.k.a. The Green Lantern in the Warner Brothers DC Comic blockbuster. Just a day ago, the short list was down to Reynolds, Bradley Cooper, and pop star Justin Timberlake. Not sure what you make of those selections, but it looks like Reynolds won out and will add a third major comic character to his résumé after Deadpool in X-Men Origins: Wolverine and Hannibal King in Blade: Trinity. One thing everyone has agreed on is that Reynolds can play headstrong and cocky in his sleep. Sounds like the casting is a winning combination. But if you still have doubts, consider this…

As already reported, Martin Campbell is directing. That man knows how to make a complete movie that has a great story and lots of good action. For reference, see the Mask of Zorro and the two Bonds he did (Casino Royale and Goldeneye). Just near-perfect fun action movies. Greg Berlanti wrote the screenplay and production is set to begin next year targeting a June 17th, 2011 release. How this affects the proposed Deadpool movie remains to be seen.