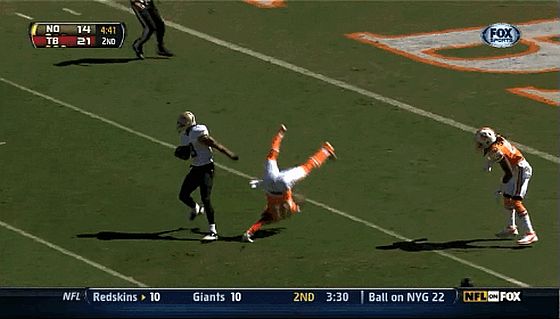 In a game that featured seven passing TD between the Saints and Buccaneers it was New Orleans receiver Joseph Morgan with the best play of the day. The second of three 2nd quarter touchdown passed by Saints QB Drew Brees, the 48 yard strike helped power the Saints comeback win over host Tampa Bay. Morgan managed to survive one attempted tackle, then popped up under the legs of a second attempted take down before getting slammed into the end zone by a third Tampa Bay defender.

A second view from the end zone shows just how close Morgan was to being down at the eight yard line.