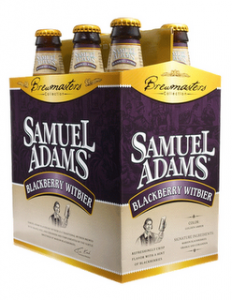 HISTORY: “The blackberries we use in Samuel Adams® Blackberry Witbier are perfect for this brew. They deliver a subtle sweetness that balances the traditional citrus flavors from the witbier. The blackberries used in Samuel Adams Blackberry Witbier are sourced from family farms, located at the foot of the Oregon Trail and Cascade Mountains in Western Oregon, where they have been growing some of the best blackberries in the world for centuries. By bringing the blackberries, orange and coriander together with an appealing malt character and a spiciness from the hops, we’ve brewed a flavorful beer with a smooth finish that’s both sweet and tart.”

I am not big fan of fruity beers as a whole. Yes, despite Oberon’s ‘either-it-is-or-it-isn’t’ mentality, I still like it but I prefer if you’d keep your orange slices for the fruit salad. Anyway, that being said, I did consider a fruit-infused Sam Adams selection and I have to admit: blackberry and a crisp German brew make fine bedfellows. Not to mention the fact that Sam Adams knows what they’re doing.

You really don’t even have to get your nose right in there to waft in the blackberry aroma. This beer smells like an orchard in a light breeze: clean, fruity, and even that hint of wheat on the back end. It’s a nice smell, especially for someone like me who had a mulberry tree in his yard as a teen. Quite the similar smell.

It’s color is a nice light amber almost Pilsner hue, but it’s no doubt a ‘white beer’ (witbier). A closer nose brings out even another faint fruitiness in citrus peel and our old friend coriander. There’s just something so nice and friendly about a German brew including coriander. Yum.

Swirl a bit, open that sucker up, and sip away. The fruit plays nicely on the tongue really complimenting the wheatiness and the slightly shy coriander. It’s a tad bitter, but that’s nearly buried under the honey-like smooth sweetness. It is a very tasty beer, regardless of the heaviness of the fruit. Blackberries make for a nice mouth feel. The hops kick in right at the end and follow up the tangy sweets with a nice spice that hangs out for a good while. This really has all the tastes covered. I think there might even be a savory element in here somewhere. I need another just to be sure. This beer would be super with pork or lamb.

RATING: * * * * 1/2
Though I’m still not a fruity beer fan per se, this one has nudged me further toward that side for sure.