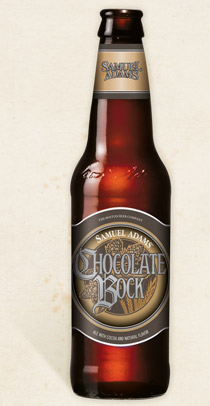 Information: Site – “To create Samuel Adams Chocolate Bock, we wanted to take the flavor beyond the taste of dark roasted malt. For this year’s brew we worked with a blend of cocoa nibs including Ecuador nibs from TCHO®, an artisanalcitrusy.” chocolate maker in San Francisco. We started with hand selected Noble hops from Bavaria and combined them with a complex selection of carefully roasted malts. This dark beer has a big, malty character with the added sweetness of chocolate. We slowly age the beer on a bed of rare dark cocoa nibs, the primary ingredient in chocolate. Known for their quality, these cocoa nibs harvested in Ecuador, impart complex aromas and flavors from chocolaty to fruity, nutty, and earthy.

Get me a chocolate brew any day. I really love the complex marriage between a dark beer and the cocoa extracts almost as though they were meant to be together. So leave it to Sam Adams to join the fray and offer up their own selection. The difference here is that Sam (or rather, Jim) has decided to go with a Bock rather than a Porter or Stout, which really seems to be the norm. For this I am grateful as getting stuck in a rut can be particularly unnerving.

This is quite possibly the most intense chocolate flavor I have ever had in a beer. The chocolate aroma is so immediate that when the pour actually happened, it had scents of an ice cream shop! Wow. The hue is a deep, deep brown that just nearly touches black. The head is a pile of foam that skitters away pretty rapidly to lay languidly on the surface. Upon first drink it’s almost as though you’re tasting chocolate -as it should be- for the very first time. I am floored. It is staunchly malty with characteristics of a dessert or breakfast pastry and suddenly reminds me of eating tiramisu. This is quite possibly one of the most all round tastiest beers I have ever had, even if there aren’t many back-up melodies to support the full-on chocolate assault. It doesn’t matter, it’s that good. This would be exquisite paired with barbecued ribs or grilled beast. Oh so very good.