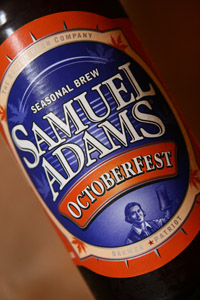 Beer Info (From the site) : “The first thing you notice when pouring a glass of this seasonal beer is the color. Samuel Adams® Octoberfest has a rich, deep golden amber hue which itself is reflective of the season. Samuel Adams® Octoberfest is a malt lover’s dream, masterfully blending together five roasts of barley to create a delicious harmony of sweet flavors including caramel and toffee. The beer is kept from being overly sweet by the elegant bitterness imparted by the German Noble hops. Samuel Adams® Octoberfest provides a wonderful transition from the lighter beers of summer to the winter’s heartier brews“

I don’t tend to jump to seasonal brews. Not because I don’t want to, I just don’t tend to swing into an entire ‘genre’ so easily. Yet, as I now sit here as a beer reviewer, and as it  is October and many, many seasonal beers have arrived on the shelves, I figured this was as good at time as any to star snatching them up through the Autumn. So this will be the first from one of the original micro brews, Samuel Adams.

The pour offers up a deep amber color with a light, frothy head that dissipates to naught but a ring of white. The first onset of odors is that of caramel and malty sweetness with a slight hoppy nose. The bouquet is quite sweet and a nice change from Summer’s usual display of citrusy brews and those with a more wheaty scent. It certainly reminds one of autumn with it’s crisp and deep burnt sugar hue that matches the changing leaves.

The first sip is alive with rich, caramel sweetness that immediately coats the palate. It has a creamy, malty mouth feel that gives way to a smooth, calm hoppy bitterness. The roasted barley notes are vibrant only aiding in their sugary flavors. It is a sweeter beer, almost reminiscent of a brew one might find being served along with cider and donuts. This is a very nice beer indeed and would go very nicely with deep roasted meats and even pumpkin pie. Though it does have a fine dessert quality to it, I would not lock it into that type of ‘after meal’ category. It’s quite nice indeed and superbly indicative of the changing seasons.

Rating: * * * * *
A wonderful autumn selection with a creamy sweetness and a lively amber hue to match the changing colors.