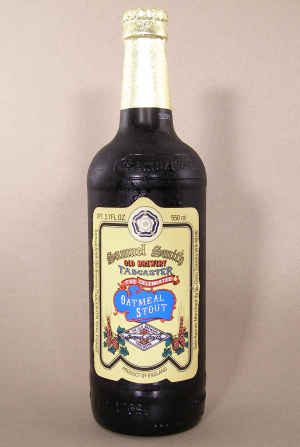 History: (From the Site) “Originally a drink for lactating mothers, oatmeal stout was described as nutritional on early labels. Oats are in the same family as barley, and a small addition yields great flavor. Popular in the late 1800’s, the last oatmeal stout was brewed before the First World War until Samuel Smith reintroduced this style in 1980. Almost opaque, with an unusually silky texture and complex, medium-dry velvet palate. Bittersweet finish.“

I have to say, I really enjoy purchasing these beers of late in the 550 ml size ranges. Not only do you, essentially, get more beer if you snatch up 4 or 5 as compared to a standard 6, but you also get six distinctly different beers, again, as opposed to the standard 6. Very cool. Anyway, this is a quite lovely brew that is, as it says up there, nearly opaque. The pour immediately opens up the scents of oats, some richer malts, and the slightly bitter nose of the supporting hops. The head is creamy and fluffy and hangs on a good bit before settling to a thin disk of foam.

Certainly not nearly as heavy as many of the stouts I’ve had recently. At first it has a wonderfully velvet mouth-feel, but that subsides nicely into a not-quite-standard stout finish. The oatmeal is most certainly there, but not at its overly-done and burnt taste that can occur with careless brewers. It has a hint of that milky, chocolaty note that comes with just about every stout, but it’s not quite as prominent. This is a different stout, to be sure, and it lets you know of such by the way you can distinguish its years-old complexity and brewing technique. Adding this to my repertoir of tasted stouts and porters, I would solidly put this within the top ten I’ve ever had. It is a very nice selection. For food pairing, go with a nice grilled surf and turf: lobster and steak would have a happy marriage with this fine brew.

Rating: * * * *
Age-old brewing techniques make this oatmeal stout a true treasure and a beer to be shared with friends.