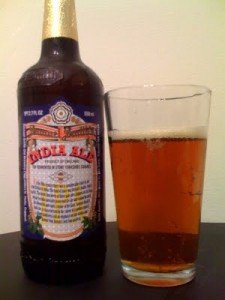 Information: Site – “In the late 18th and early 19th centuries there was a considerable trade in beer to India. Leaving the India Docks in London, ships would sail around the Cape of Good Hope through the Indian Ocean to Bombay and beyond, a three-to four-month trip. Highly hopped pale beers brewed to withstand the trip became known as “IPA,” India Pale Ale.  A restrained maltiness and an emphasis on the aroma and flavor of hops from England’s finest vineyards.”

Samuel Smith knows how to make beer. They’ve been doing it since: “1758 and is Yorkshire’s oldest brewery. Samuel Smith is one of the few remaining independent breweries in England, and further is the last to utilize the classic Yorkshire Square system of fermentation solely in stone squares.” So it comes as no surprise that their IPA is literally one of the best in the business. No need to dry hop, no need to double or triple hop, all that’s needed is a tried and true recipe that produces an amazing product.

The pour is a ruddy copper with a very fine-foamed head that really only hangs about for a while before shrinking into a white cap. The nose is rich with malts and a nutty quality that almost sets it against brown ales. There is a slightly bitter/sour hoppy scent that, after being ‘opened up’ really slides to the forefront.  There is a slightly citrus floral quality as well that balances out the nose very well.

The taste is nothing short of incredible. It is amazingly alive with tangy yeasts, peppery-piney hops, and a crisp, fresh grassy quality that brings about images of the location from which it hales… oddly even if you’ve never been there. Fruits play back-up such as grapefruit and sharp pear with a clearly defined melody of parsley and vinegar. It is quite the parade of differentiating flavors to be sure. This is an IPA worthy of relaxing and sipping as you let the myriad tastes play out. I would recommend this with garlic shrimp or even duck. Wonderful.