Humor > Videos > Santa Was Terrifying in the 1920s

Santa Was Terrifying in the 1920s 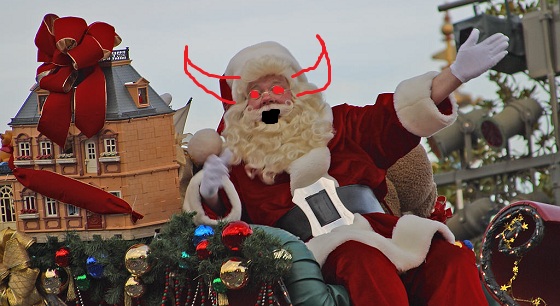 If our crudely edited paint-on version of Santa isn’t striking fear into the base of your soul right now, screw you, we worked hard on that. But that’s not the point. Old St. Nick is the very personification of good cheer and well-being to all mankind. He’s the one guy on Earth we willingly let break into our homes because we know he’ll be really cool about it and leave us expensive whiskey and Batman socks.

Throughout the course of human history, Santa has been shown as a guy children love in almost every medium, Note the use of the word “almost,” because boy are you in for a treat. Back in the 1920s the phonograph was all the rage. And Thomas Edison had an idea to cash in on the Christmas season. He released a special recording, in which you could hear the disembodied voice of Santa claim he was hidden in the terrifying new music box your parents just bought. If you think we’re exaggerating, listen to this shit.

If you put that laugh as your ringtone and it went off in the cinema, you’d have every goddamn seat to yourself. Why did Edison think this was a good idea? Why did he think children would be excited to hear the guy who brings them presents was trapped inside a plastic disk? We wouldn’t be surprised if this recording is so rare simply because children hearing it smashed it to bits in order to kill the bad man who’d kidnapped Santa’s soul.