Humor > News > Sarah Palin Can Make Up Her Own Words Now, Too

Sarah Palin Can Make Up Her Own Words Now, Too 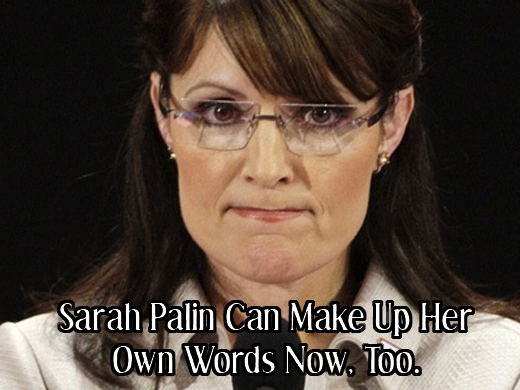 Well, well, well… it seems that critically lambasted and vociferously outspoken former Republican running-mate and Alaskan Governor, Sarah Palin just can’t seem to stay out of the limelight… let alone the press. Just when you thought it was safe to turn on your TV (in the weak hope that you’d maybe avoid another Palin overload) this week, it turns out that there are Palins all over the damn place. First, Sarah’s hypocritical daughter, Bristol -she the advocate of abstinence yet proudly paraded her knocked-up ass all over the Gubernatorial place a few years ago- is still, by some Miracle, hanging on over at ABC on ‘Dancing With the Stars’. That’s right, this pumpkin-headed train wreck has somehow managed to sugar her way into America’s hearts. Wonderful.

And then there’s Sarah herself. Oh Sarah, what’s to be done with your duplicitous Siren song than to couple it with your beauty-is-in-the-eye-of-the-beholder visage and plaster it, once again, all over TV. It seems that TLC (motto: ‘We’ll turn anything into a show!’) has decided that following Sarah around Alaska and allowing us, the viewer, into her little slice of an anomalous lifestyle would somehow be exciting. Sadly, it was. According to Yahoo: “According to TLC, roughly 4.96 million people tuned in to watch the first episode of “Sarah Palin’s Alaska.” That’s the biggest premiere in the channel’s history.” Oh sweet Heaven, what is this world coming to. Is that really what we’re craving in entertainment these days? Oh, humanity… I stand ashamed.

And yet, you still reach higher echelons of inanity and scarcely cease to astound me. It seems that the esteemed New Oxford American Dictionary folks have awarded Mrs. Palin with her very own word. Here’s how it all went down, according to the same Yahoo article: “…today the New Oxford American Dictionary declared “refudiate” the top word in 2010 — a verb that Palin apparently invented. The former governor used the word in a Twitter message last summer, calling on “peaceful Muslims” to “refudiate” a planned mosque near the site of the 9/11 attacks in New York. When critics pounced on the made-up verb, Palin deleted the Tweet and replaced it with one that called on Muslims to “refute” the site — even though that usage made no sense, either, since to refute is to prove something to be untrue.

But in a release today, the New Oxford American Dictionary defended Palin’s use of the word. “From a strictly lexical interpretation of the different contexts in which Palin has used ‘refudiate,’ we have concluded that neither ‘refute’ nor ‘repudiate’ seems consistently precise, and that ‘refudiate’ more or less stands on its own, suggesting a general sense of ‘reject,’ ” the New Oxford American Dictionary said in a press release.” I give up. This absolutely buries any last vestiges of hope I had for the Human Race. Where’s my gun?