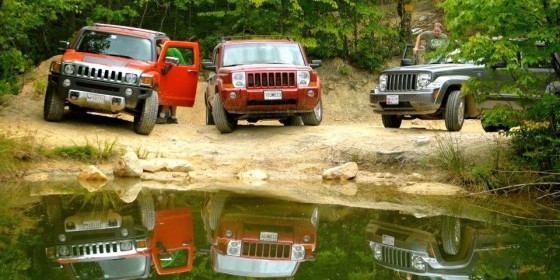 Recently we made a trip out to George Washington National Forest in Virgina for a bit of off-roading. All three vehicles on the trip were stock, so we stuck to fairly basic trails, but they still provided a day of fun for our group. We grabbed some video of the trails, but with over 1.5 hours of video captured, we assumed you didn’t want to watch the entire thing. Instead we’ve taken snippets from different camera angles and pieced together this little 3.5 minute clip to give you a general idea. Keep in mind it always looks way easier on film.

The video was captured utilizing a Flipcam mounted with a Satechi Camera Holder and Mount. It’s essentially a cheap way of turning your existing Flipcam (or any mountable camera) into a poor man’s GoPro, as you can see from the photos below. 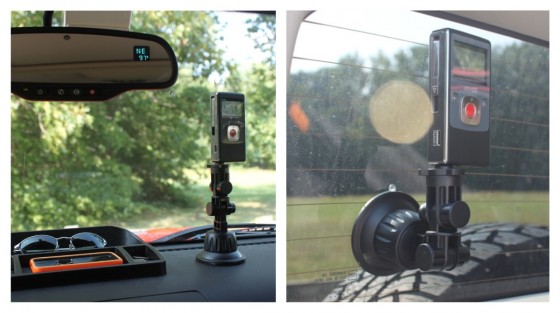 The adhesive Smart Pad is attached to the rubber suction (with easy to use screw knob) and allows this thing to be mounted on pretty much any smooth surface. We jostled the hell out of this thing on fairly rough trails, and the mount showed no signs of getting loose.

In addition the mount has two 180° swivel hinges and a 360° rotating connector which allows you to position the camera exactly where you want it. I found the push button operation on those hinges ideal, as I’ve used plenty of similar products which required loosening and tightening of screws for the same functionality. This was much quicker and easier. 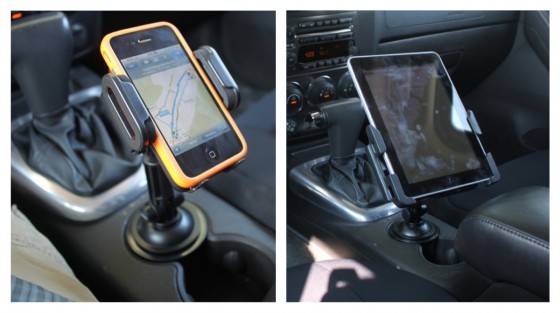 We also tested out the Satechi Cup Holder Mount, which can hold a variety of phones and tablets. The mount had an ingenious method of expanding to fill the cup holder with pressure, which allowed it to secure itself in a variety of vehicles. In the photo above you can see my cup-holder liner is still in place, but it worked even better without that liner.

This mount utilized the same great swivel hinges mentioned above, and then expandable holders for both tablets and phones. The tablet one expanded to allow an iPad to be held in both portrait and landscape modes. These holders felt a bit flimsy to me, so I worried about breakage under heavy usage. I also had a bit of difficulty getting the brackets to hold my devices straight, as the top piece seemed to be a few degrees either left or right of perpendicular.

I enjoyed the temporary nature of this mount, as it’s something that I think I would only be using for long road trips. Mounting an iPad right there with GPS and Map capabilities was so ideal for driving, and it could even play some movies for you when the Cops aren’t around. Depending on how much space you have between front seats, you might find that the iPad is in your way though, when mounted right in between you and your passenger.

Overall we had a fun day trip, and enjoyed testing out the capabilities of Satechi’s mounting equipment.