It’s Halloween, so that means another Saw movie is about hit theaters. But this installment means the certain end for the Saw franchise, at least that’s what Director – Kevin Grutert leads us to believe. He was amongst the panel discussion at the 2010 NY Comic-Con along with stars Cary Elwes, Betsy Russell, and Costas Mandylor and we were fortunate enough to be there asking questions about the upcoming film out in theaters October 29th. 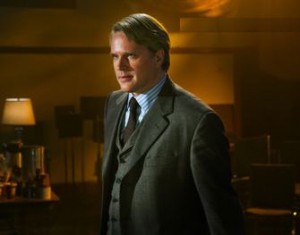 Cary Elwes returns from the first film as Dr. Gordon and we asked him as an actor, what are some of the benefits of revisiting a character after all these years:

We also asked Cary if being around all the comic nerds of Comic-Con he was asked any questions about the Princess Bride. He smiled politely, paused and said…. “A few.” I assured him that I wouldn’t be asking any. 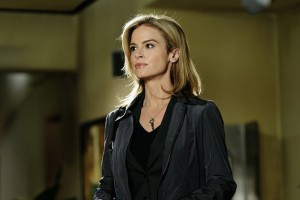 Also returning is Betsy Russell who plays Jill. At Comic-Con she mentioned she hadn’t even seen the movie yet but was extremely excited to see the finished product and really thought they went out with a bang. We also got to ask her what some of the unobvious differences there were between working on a horror flick and working on a regular film:

“I always say that it’s fun being in the make-up room because there’s missing limbs and people always saying ‘who stole what leg, who stole the arm?’ It’s fun going back to work here year after year and it’s like a family and it’s really exciting on top of it. It’s the best experience you could ever hope to have as an actor.” 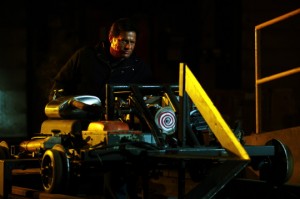 Costas Mandylor who once again plays Hoffman, was decked out in all NY Yankees regalia. They were playing game three of the NY vs. Minn series and when I asked him if the Yankees were going to sweep that night he joked, “I’m in New York, I gotta say yes.”

“I used to go up to the guy strapped to the big pendulum trap thing and tickle him between takes and just goof around with people.” 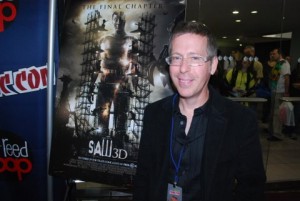 Director Kevin Greutart was perhaps the most excited out of the four for the release of the new film. He mentioned how fascinating and interesting it was to shoot the movie in 3D and the added challenges along the way. When we asked if he’d thought  3D was just a passing fad he nixed the idea pointing out that a lot of the theaters have converted themselves to show 3D movies so he felt this was something that was here to stay.

If this really is the last Saw movie, it seems as if they’ve cemented themselves as one of the greatest horror franchises ever. The traps are more extravagant, the kills are gruesome and fierce, and the action ties it all together, answering all the questions of Saw’s biggest fans. And when everyone was asked where they think they measure up to all the other horror greats out there, Betsy eagerly answered for them all – “We’re number one!”