Scarlett Johansson is returning to our movie screen on July 25th, and we couldn’t be more excited. ScarJo stars as Lucy in the film by the same name, and will appear alongside Morgan Freeman, which gives the film about a 75% chance of being awesome. Oh, and she’ll apparently be wearing a lacy black bra underneath a white t-shirt, so there’s that… 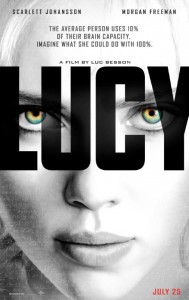 From La Femme Nikita and The Professional to The Fifth Element, writer/director Luc Besson has created some of the toughest, most memorable female action heroes in cinematic history. Now, Besson directs Scarlett Johansson in LUCY, an action-thriller that tracks a woman accidentally caught in a dark deal who turns the tables on her captors and transforms into a merciless warrior evolved beyond human logic.

That sounds like is has the potential to become a SciFi classic, let’s look at a trailer, featuring the previously mentioned black bra :

As if that doesn’t already get you pumped up enough about LUCY, we have a sweet prize pack to raise the stakes even more. Use the widget below to enter, and one winner will unlock their full potential with a $50 Visa Gift Card and a LUCY T-Shirt & Hat!