Humor > Pop Culture > Scary or Wimpy? Dressing Your Kid Up For Halloween

Scary or Wimpy? Dressing Your Kid Up For Halloween 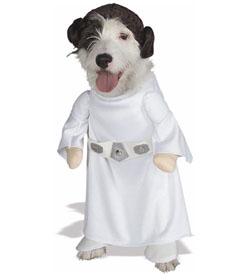 As they have for years, this Halloween parents across the land will send their kids out into the cold, October night dressed in costumes to score candy. And while Some may wear something cute, like a princess costume, and some will dress as pirates or cowboys, the majority of kids prowling the streets this October 31st will be dressed as monsters, ghouls, and all manner or scary, supernatural creatures. After all, isn’t that what Halloween is all about? Some good-natured scares?

Well not according to New Jersey dad, author, and all around killjoy Joel Schwartzberg. According to him, Halloween costumes have gotten too frightening for kids. He points to realistically gory get-ups of famous horror characters like Jason, Freddy Krueger, and Leatherface from the Texas Chainsaw Massacre as evidence that costume makers are marketing hardcore blood and guts this Halloween over old-fashioned ghosts and goblins. Over on his new website, tooscarycostumes.com, Schwartzberg has launched a nationwide awareness campaign against the violent costumes. And by nationwide awareness campaign, we mean he’s willing to make paid appearances where he can show you costumes he thinks are inappropriate for kids.

Schwartzberg’s mercenary instincts aside, where are concerned parents supposed to get nonviolent costumes of their kids? Well, others have taken up the cause and are aiming to provide “kid-friendly” costumes to those pussies. Chief among them, Lori Liddle who introduced a touchy-feely line of costumes called Wishcraft Halloween as part of her Chasing Fireflies clothing line. Now, it’s all weel and good to have some non-bloody options for squeamish parents, but some of these are just going to far.

First, some costumes guaranteed to get your little one laughed at or severely beaten.

1) One of the Three Musketeers 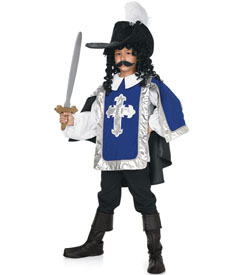 At first glance, this costume doesn’t seem that bad. On the plus side, it contains a sword and black boots, but on the negative side it also contains a hat with a huge feather, a wig of long, curly black locks, a blousy white shirt, and a fake mustache that would make Ron Jeremy blush. And don’t even get us started on the cape. 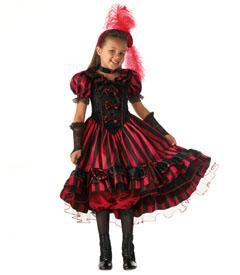 If you can’t go violent and scary this Halloween, why not go sexy and trashy? There are all manner of sexy costumes for adult women, so why not make one for little girls? Chasing Fireflies Can Can Dancer is the perfect costume to show your daughter that she can be any kind of stripper she wants to be. Even a real classy one from France! Toulouse Lautrec would be proud. 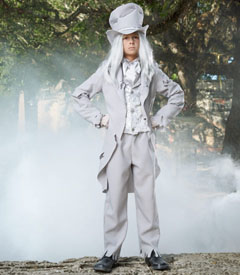 This is where things start to get a little weird. Never mind the Oscar Wilde suit and the jaunty cravat, what is up with that hair? What ten year old in his right mind is going to parade up and down his neighborhood in a silver wig that looks like it was stolen from Cher’s dressing room? And what’s with the flouncy hat? Chasing Fireflies Ghostly Boy violates the cardinal rule of boy’s Halloween costumes: Don’t dress your kid up like Chef Boyardee’s goth nephew. 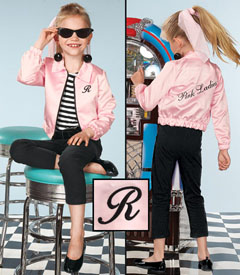 Remember the Pink Ladies in Grease? You know, Frenchy, Marty, Jan, and Rizzo? Wouldn’t be great if your little girl could be just like them, even for one night? Well, except that one who wrote love letters to convicted felons. Or the one who dropped out of high school to cut hair. Or the one who used a faulty condom and thought she was pregnant by Jeff Conway. Or the one who smoked like a chimney. Geez, those Pink Ladies sure were losers. You might as well dress your kid up as a piece of white trash. 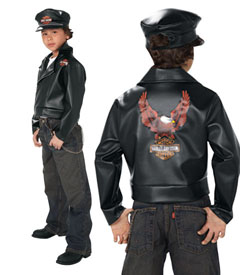 Let’s get one thing perfectly clear, under the right circumstances, Leather Daddies can be one of the most natural and beautiful of all God’s creations. In the right place (a bar) and at the right time (when you’re really drunk), who hasn’t fallen under the spell of a giant guy named Carl draped head to toe in black leather? As long as everyone’s over 21 and you repress the memory the next day, no harm no foul. But when you make a little boy dress up like he’s ready to cruise a truck stop toilet at 3 am, that’s just creepy, dude. There may not be a single ounce of gore in this Halloween costume, but that doesn’t mean it isn’t disturbing as hell. 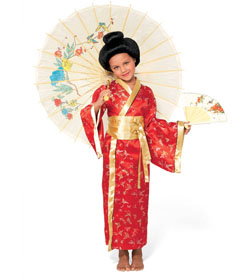 Oh come on! We knew we were stretching a little on the Can Can girl, but this just wrong. There’s nothing wrong with providing nonviolent Halloween costumes, Chasing Fireflies, but there is something very wrong with dressing up little kids as whores.