Scenes from the John Wayne Walding 400 at the Brickyard 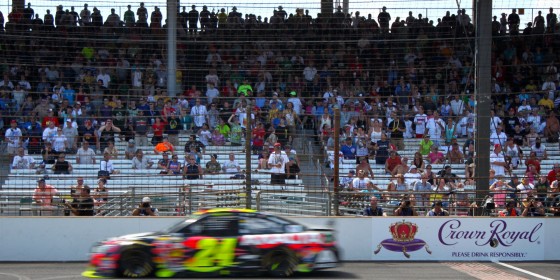 This past weekend we were invited by Crown Royal to attend their NASCAR race in Indianapolis for the 2nd straight year. When given a Hot Pass and a Media Credential for one of the biggest races of the year, we’re going to make damn sure we bring along a camera to share the experience with our readers. The race was officially called Crown Royal Presents the John Wayne Walding 400 at the Brickyard Powered by BigMachineRecords.com, and it was won for the record fifth time by Jeff Gordon. It was the 20th Anniversary of the Brickyard, and Jeff Gordon also won the inaugural running back in 1994.

Our 60 image gallery below contains photos of the full behind the scenes NASCAR race experience, from the garage to the checkered flag. There are many moving parts to race day, and so many integral members of the team that help the driver reach the finish line first. We grouped some of our favorites in sequence here below in the first 20 photos, but definitely check out the other two pages of the gallery for many more from our awesome day at the race. We admit some of the images are blurry, but those cars are going awfully fast!