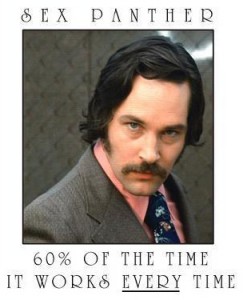 Only in Ft. Worth. MSNBC has the story of a Bank of America call center that had a bit of an interesting day at the office. A pungent aroma that was suspected to be carbon monoxide or some other toxic fumes, sickened almost 150 people, including hospitalizing 34. Turned out the culprit was just perfume. Many of the co-workers in the office complained of dizziness and shortness of breath following exposure. One even stated, “It’s a formidable scent… It stings the nostrils. In a good way.”

Investigators do not know what type of perfume was sprayed. But those in the know are aware that they’ve done studies on this kind of thing. 60% of the time it works, every time. Although I guess this was part of the other 40%. Hidden among this gem of a news story is even biggest news. That Bank of America actually has call centers in America, and not all just overseas in some third world nation. Imagine that!

Veronica Corningstone: My God, what is that smell? Oh.
Brian Fantana: That’s the smell of desire my lady.
Veronica Corningstone: God no, it smells like, like a used diaper… filled with… Indian food. Oh, excuse me.
Brian Fantana: You know, desire smells like that to some people
Garth Holliday: What is that? Smells like a turd covered in burnt hair.
News Station Employee: Smells like Bigfoot’s dick.