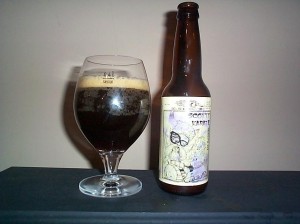 Information: (Site) “For those of you who don’t know who “Scotty Karate” is… He is a local (Michigan) one-man band who plays an amazing slurry of honky tonk influenced, punk country songs. His voice is amazing as well as his high energy shows. (Check him out @www.scottykarate.com) So, we decided to make a beer and name it in his honor. This beer is a big, full bodied Scottish ale. It is 9.75% alc. but it is very smooth and balanced.”

It’s truly a treasure when one stumbles upon a local seller who is more than willing to supply the town with a sure stock of literally hundreds of different beers. The place is called ‘Portage City Wine Seller’ (there’s your play on words) and I have to give them a bit of a shout out because the purveyors actually asked me how I could possibly get paid to drink beer. Well, guys, if you read this: thanks for the miles and miles of beer styles.

The pour is a deep brown with just a slight bit of unfiltered fog in the bottom. The head is momentarily rich and creamy, but quickly fades to naught but a thin, white ring. The scent is slightly fruity -an apple nose- with an eclectic mix of dark caramel and a hint of nuttiness. It reminds me, actually, of a beer-style nut-coated candy apple. The smell is delicious.

The taste is unbelievably complex! I have not had a beer with this amazing amalgam of flavors in a long time… there is an awful lot going on here. Let’s see: There are some deep grassy notes, almost like leafy rather than just earthy (if you know what I mean), in fact, it’s a bit like eating an oak leaf off of the damp ground in autumn, only far better than that description lets on. The fruity notes from the aroma continue into the taste, except they’ve brought friends in the form of tart cherries. The nutty flavor is heavy in the creamy and velvety mouth-feel, and that flows easily into a peppery throat that completes the whole experience very nicely. Unreal… just a beautiful mix of tastes and flavors in what is a very interesting beer. Obviously, it could certainly pass as a traditional Scotch, but with a little something more. So tasty. Tis is something you have to drink to experience, as it is just so special. If you were to pair this with food, something grilled with a nice, caramelized crust like a pork loin or some game. Something, essentially, deeply flavored. Garlic, too. Definitely garlic. Find this and get it. Just be wary that it’s 8 bucks (here) for a four-pack.

Rating: * * * * *
An out-of-this-world beer drinking experience. Something so nicely different from the norm.