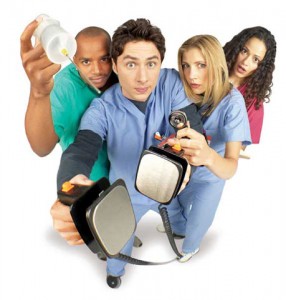 It looks like Scrubs, one of the funniest sitcoms currently on TV (as far as I’m concerned anyway), is returning for another season. According to James Hibbert’s The Live Feed:

Star Zach Braff closed a deal to come back for six episodes to transition the show to its new set-up, details for which are still being hammered out. Sarah Chalke is expected to return for six episodes. Donald Faison, John C. McGinley and Neil Flynn have closed deals to continue as regulars. Judy Reyes has not been approached, but may guest star.

I was pretty excited when I first heard this news, but after reading the article it sounds more like another rumor I’ve heard about, a new series starring the current crop of interns. The first 6 episodes should be be good, with Zach Braff and Sarah Chalke signed on, but after that who knows.

You should also check out The Women of Scrubs Season 8.