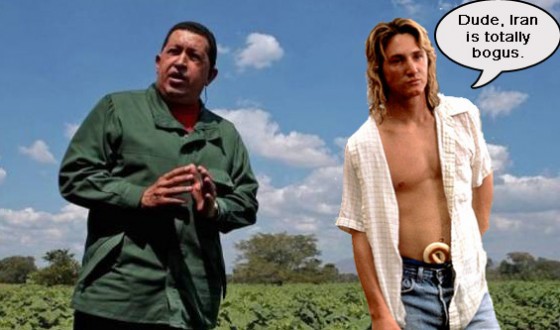 Oscar-winning actor and FOX News punching bag Sean Penn was up to his old humanitarian tricks again last week in helping precipitate the release of two American hikers being held captive in Iran. Apparently, Penn flew to Venezuela to meet with pal Hugo Chavez, who in turn placed a call to Iranian president Mahmoud Ahmadinejad, urging the Yakov Smirnoff look-a-alike to set the duo free.

“Penn was very committed to the case…he flew to Caracas several months ago to raise it with Chavez and he kept on it,” a source told Reuters.

Both hikers, Josh Fattal and Shane Bauer, 29-years-old, were released Wednesday on $1 million bail from a prison in Tehran. They insisted they got lost while hiking, but were convicted of espionage and originally sentenced to eight years in prison.

Man, Sean Penn is the definition of awesome. He wins awards, aids hurricane victims, bangs Scarlett Johansson (allegedly), has great hair and does what the White House and Congress seem incapable or unwilling to do. Plus, he’s tight with a despot. Too cool. What I wouldn’t give to be friends with a despot. Imagine sitting around sipping expensive whiskey while sentencing political enemies to death. That would fu*king rule!

In other news, Sean Penn is still a ginormous douchebag. That is all.