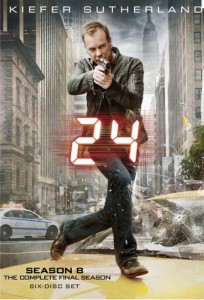 Season 8 of 24 arrives on December 14th to Blu-ray and DVD from Twentieth Century Fox Home Entertainment.

In 24 Season 8, New York City is the backdrop and Emmy Award winner Kiefer Sutherland is back as Jack Bauer.  Just when he thought he was leaving the dangerous life behind to be with his daughter and her family, Jack is once again called on by CTU to uncover a Russian extremist plot to assassinate an Islamic leader during peace negotiations with U.S. President Taylor. Fan favorites Elisha Cuthbert, Mary Lynn Rajskub, Cherry Jones and Annie Wersching are joined by new faces Anil Kapoor, Katee Sackoff, Bob Gunton and Freddie Prinze Jr. for Jack’s final, nail-biting 24 hours protecting America’s freedom.

Season 8 is a six disc set. All of the discs contain part of the 24 hours of Jack’s adventure. Discs 5 and 6 have bonus features like deleted scenes and behind the scenes footage. You can purchase the DVD or Blu-ray set at Fox’s website or Amazon.com. But if you want to win a copy of the final season of 24 follow us on Twitter for a chance to win the 8th Season on DVD. You can almost hear Jack Bauer yelling at you to enter! Check out the quick clip below.