Media > Movies > Season of the Witch on Blu-ray and DVD

Season of the Witch on Blu-ray and DVD 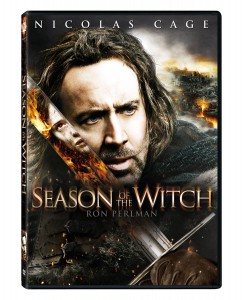 I was able to check out Season of the Witch with Nicolas Cage and Ron Perlman. The film starts with Cage and Perlman as knights returning from the Crusades to find their fatherland ruined by the plague. The church elders accuse a girl of being a witch responsible for the destruction, and command the knights to transport the girl to a monastery so the monks there can lift her curse from the land.

Throughout their mission they come across many threats that stand in their way.  The action and special effects are impressive and Perlman and Cage work well together. Plus, I am a huge fan of Ron Perlman’s work in Hellboy and Sons of Anarchy, so I was happy to see him.

The movie was directed by Dominic Sena who has helmed Gone in Sixty Seconds and Swordfish; if you liked those films you will enjoy Season of the Witch. It comes to Blu-ray and DVD today, June 28, from Twentieth Century Fox Home Entertainment and includes an alternate ending, deleted scenes, behind-the-scenes featurettes, commentaries and more. You can purchase the film at the Fox DVD site or win a copy if you follow us on Twitter. Check out the trailer below!