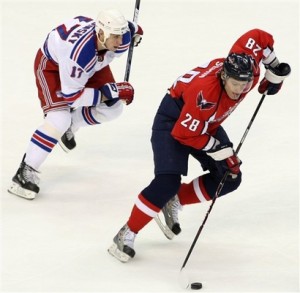 Apparently, without AK47s, Russians don’t know what to do during a fight. On Saturday, Capitals star and often-injured forward Alexander Semin got into it with the Ranger’s Marc Staal, but instead of throwing punches, Semin likely delivered the most slaps to an opposing player in any fight in NHL history. After Staal pulled off Semin’s jersey and shoulder pads, Staal fell to the ice, at which time Semin wasted no time wailing his open hands at Staal’s face, like a 12 year old girl. I blame Donald Brashear, who should be teaching these youngsters how to throw down.