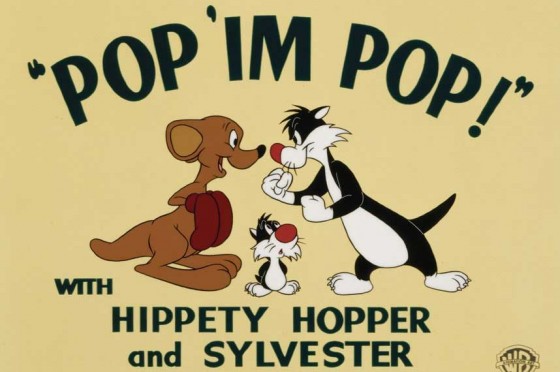 Much like myths in real life, just enough of the cartoon myth is based in reality to make it that much funnier. Luckily, thanks to the geniuses behind the classic Looney Tunes, many of their best tales are based on myths. Now, we’re not talking myths like dragons and mad scientists. Nope, we’re talking myths like, “Did organ grinders actually exist?” and “What’s the deal behind Alum?” These and many other myths come into play quite heavily in Looney Tunes cartoons and I know that a lot of you were likely wondering the same things. So, enjoy a few toons and a few answers to those nagging questions.

What Was It With Airplane Gremlins?

Yeah, we're not talking about Dante's Mogwais or subsequent green lizard-things in this case. Nope, what I am referring to is the little airplane wing-eared critter from the 1943 Bugs Bunny classic Falling Hare. If you've never seen this masterpiece, you will in a minute, but what you'll notice is that the gremlin has everything to do with the airplane itself and its imminent destruction. But did the worry of these little guys really happen in the actual Military?

Yup. The worry was a founded in reality as you can imagine. You see, during the 1920s in the Royal Air Force, it was pretty common to blame anything but the faulty aircraft themselves when one, or several, would mysteriously plummet to the ground. So, gremlins were more or less imagined to at least sort of alleviate the pilots' innate fear of being up in the air in a giant metal tube. Eventually, gremlins and their pesky nature moved forward into WWII and wreaked their brand of havoc when any unexplainable incident occurred. Sadly, none were actually little men with goofy headgear... or really anything for that matter. They were simply products of the aviation age. But still bastards.

What Does Alum Really Do If You Eat It?

First of all, let's take a look at what Alum really is. Because according to the cartoons, any substantial mouthful will shrink your head to humorous Beetlejuice-like proportions. Basically, because Alum was used in pickling brines (due to its astringent, sweetish, acidic properties) and was very useful and potent at shrinking cucumbers into said pickles, it only made sense that as a comedy vehicle it would, when mixed into whatever the victim was going to eat, would shrivel the mouth/face/head and make them unable to even speak, or make them hit a really high octave. And therein lies your funny.

Bugs used this device a time or two, the most well-known of which was this particular cartoon titled Long-Haired Hare from 1948. During this exciting episode, we find the titular bunny doing his classic battle with opera singer, Giovanni Jones. If you haven't seen this, you can imagine where the Alum might come into play.

One of the many classic antagonists that perpetually attempt to best the rooster, Foghorn Leghorn, is the nasty weasel. On more than one occasion, the slobbering, overly hyper, constantly hungry menace is seen on a wanted poster of sorts proclaiming that he is a chicken thief and is to be avoided at all costs. But is this a real-world issue, or do chicken farms rarely, if ever, find themselves under attack by weasels?

Nah, this is just a plot device for the cartoons. A weasel's build makes it ideal for hunting prey that live in holes, much like the weasel itself. And if you're talking about the predominately North American species (the stoat), then they prey on mice, voles, rabbits and other ground-dwelling critters. However, a few species will hunt birds in trees, though none really eat chickens as regular meals.

In any case, enjoy Plop Goes the Weasel from '52 featuring the massive barn fowl and his weasely foe.

Were There Really Boxing Kangaroos?

In the 1949 cartoon, Pop 'Im, Pop! featuring Sylvester and his son, the two cats run afoul of Looney Tunes regular, Hippity Hopper and his mother, Gracie, the Fightin' Kangaroo. According to this particular cartoon, Gracie is a champ and regularly wins bouts giving her top billing as a boxing animal. But where does this supposed myth come from? Were there really boxing animals of any kind at any point?

In reality, no. It all has to do with the appearance of the 'roo when it's attempting to defend itself from an attacker that's typically larger than itself. It will regularly hold the foe at bay with its 'arms' while kicking the crap out of it, often gashing it up pretty badly with its powerful legs. Nasty. This image has since become a national sporting symbol in Australia. Sorry, no boxing kangaroos in reality. Well, except in a few stray black and white flicks and, of course, cartoons.

Were There Really Organ Grinders?

When one thinks of Organ Grinders (if one thinks of them, that is) the immediate image is that of a stereotypical Italian guy cranking away at his portable music box while a monkey entertains the crowd and gathers whatever tips the people toss at them. But the question must be asked: Did these duos really do what they did in the cartoons?

In short, yes. In long, also yes, but almost exactly as I stated it above and just how you see it in the toons. With the one caveat being that typically these organ grinders were basically loiterers and people of lower class. Basically, they skirted the law by actually having a very minimal form of performance and would quickly skitter out of arms reach of those folks who were genuinely irritated with the music. The monkey was an actual part of the show, and with such the audience would typically tolerate them if not for just a bit more.

This cartoon is 1948's Hurdy-Gurdy Hare and it features said organ grinder and his pet. In this case, however, they're more about thievery than entertainment. Things go south when Bugs and a gorilla get into the act.

What is a Tasmanian Devil Anyway?

Well, despite what the animators would have us believe, they definitely don't turn into mini tornadoes. But they are real, and they are every bit as mean and ornery as they're portrayed. In fact, according to the following cartoon titled Devil May Hare from 1954, these nasty som'bitches eat: "tigers, lions, elephants, buffaloes, donkeys, hippopotamuses, rhinoceroses, giraffes, octopuses, moose, ducks,". So I suppose this begs the query... do they?

Well, likely not many of those, but according to Wikipedia, this is what to expect if you visit Tasmania, the only place where they're naturally found: "They are distinguished by a stocky and muscular build, black fur, pungent odour, extremely loud and disturbing screech, keen sense of smell, and ferocity when feeding." Sounds about right. Also, this is what they actually tend to eat: "Tasmanian devils can take prey up to the size of a small kangaroo, but in practice they are opportunistic and eat carrion more often than they hunt live prey. Although the devil favours wombats because of the ease of predation and high fat content, it will eat all small native mammals such as bettong and potoroos, domestic mammals (including sheep), birds, fish, fruit, vegetable matter, insects, tadpoles, frogs and reptiles. Their diet is widely varied and depends on the food available." So there you have it. Now watch a cartoon.

Is The Acme Company Based in Reality?

Everyone knows that when tooling around the toon world, it's best to look up the Acme Company when in need of any form of weapon, contraption, suit, portable hole, or trap. Even Roger Rabbit's plot had an aside that led them to Marvin K. Acme, the evident owner of the Acme Corporation. And how many times have you seen Wile E. Coyote take an item delivered to him from the Acme Company in a feeble attempt to trap that slippery Road Runner? Almost always. So was this Acme based on something that actually existed?

Well, yes and no. Yes, Acme existed in many different incarnations but only because the phone book was new and exciting, Acme was a name that would assure your company a spot very close to the front. In the 1920s when the Yellow Pages were first printed, it made sense to be as close to the opening of the new book as possible, thus many companies chose the name Acme, with a few surviving today. However, and this is the 'no' portion, none specialized in the myriad contraptions and doohickies ordered by Wile E.

Fast and Furry-ous is the first official cartoon featuring the titular characters and, though Wile E. uses many items, they're not yet all from Acme. Apparently the conglomerate had yet to snap up all the products.