After two months of Occupy Wall Street, the media have covered every angle, almost.

We’ve read the demands. We’ve seen the signs, both serious and humorous.

Celebrities have checked in to show their support and politicians have chosen sides.  Musicians have made guest appearances.

We’ve followed these events from their beginnings on Wall Street to Zuccotti Park across the way, around the country and the world and back, through travails and triumphs, and now anticipate: Where does it all go next? I guess last night we found out, but the protestors are making a comeback.

We’ve probably even indulged in the inevitable and incongruous, “Hot Chicks of Occupy Wall Street” (or will now). We’re talking about the internet here.

Whew. Let’s take a break from all the economic, political and controversial noise and enjoy some real, grass-roots Occupy Wall Street sounds of protest.

If only a 1% would sign some of these people.

“I HEAR YOU KNOCKING”
by Columbia University Band

“STICKS ON METAL”
by Just About Everyone at OWS

“UNTITLED” or “NASHVILLE”
by Dane Ohri

“THE WOMAN IN RED”
by The Occupy Wall Street Percussionist Orchestra

And who is that Woman in Red? It’s Katie Meyler who founded morethanme.org, whose mission is to bring education to children in Africa, specifically Liberia.  We’re suckers for a pretty lady at Gunaxin. 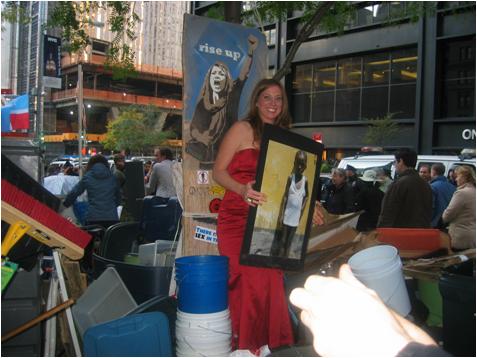 Katie Meyler, The Woman in Red