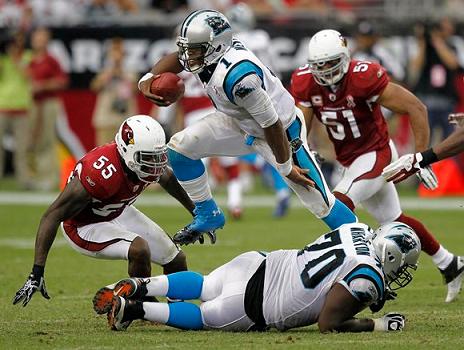 Cam Newton has played one game in the NFL and already broken two rookie records, and Hall of Famer ones at that. In his impressive debut Sunday, and despite a 28-21 loss to the Arizona Cardinals, Newton put the NFL, fans and record-book scribes on notice, throwing for an all-time rookie game best of 422 yards, besting Otto Graham’s first-year mark of 346 by almost a c-note.

That’s not all. He shattered Peyton Manning’s rookie record in a season opener by a buck-twenty. In 1998, Manning threw for 302 yards in the Indianapolis Colts’ first game of the year. Let’s put Newton’s 422 in another perspective: Brett Favre, the all-time passing yards leader, threw for 400 yards, get this, only twice in his entire career.

Newton had the second most passing yards in Week One, behind Tom Brady’s statement-making 517. Veteran champ Drew Brees was just three yards behind Newton at 419. That’s a Hall of Fame sandwich. Let’s not get ahead of ourselves, though. It’s just one game, but it does appear that this year’s No. 1 draft pick is for real, rewriting the book from the get-go.

So, what other rookie records out there are within Cam’s sights? Here’s a rundown of the seven main QB rookie records that might one day soon be Newton’s own. 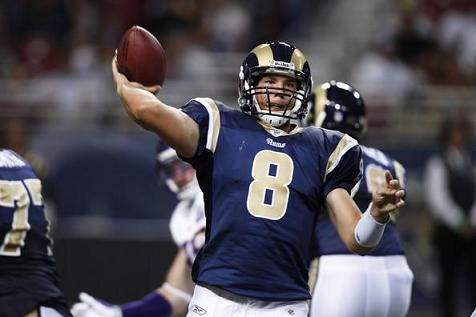 Sam Bradford, the 2010 No.1 pick out of Oklahoma, made an immediate impact on the pro football field. His Rams didn’t fair very well, finishing 7-9 and just short of a playoff birth, but the future looks bright in St. Louis. Bradford had a rookie season that ranks as one of the best ever for a QB, tossing the pigskin for a veteran-like (and damn good veteran-like) 3,500+ yards. He threw for 18 touchdowns and broke both Peyton Manning’s rookie pass attempts and completions records.

Cam was 24 for 37 on Sunday. That compares to Sam’s big 32 for 55 and Peyton’s similar 21 for 37 in their first games. Flatly extrapolating over the season, Newton would wind up with 384 completions. Now of course things happen, and the Panthers did play the Cardinals after all (so did Bradford’s Rams that first game, btw), but Cam’s got the goods to make it happen and break Bradford’s rookie completion record. Bradford did it with Danny Amendola and Brandon Gibson as his top receivers. Newton’s got super-veteran Steve Smith and super-bowl-champion tight end Jeremy Shockey (and Greg Olsen to boot) – and the Panthers have a top five offensive line. That all could help push Newton over the top. 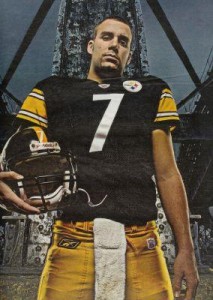 So you think he’s just a big aggressive doofus who can’t play a pretty game of football? Guess again. Roethlisberger pretty much always has a high passer rating and no exception his rookie year, when he had the best ever for a pro freshman, 98.1.

The 11th pick out of Miami (OH) went 13-0 that year for the 15-1 Pittsburgh Steelers, who went to the AFC Championship Game. That’s one mark Newton won’t match.

But hey, Cam spotted a 110.4 rating on Sunday. Holy Bejesus.

Cam can top them.

So Sam Bradford threw that football for over 3,500 his first time around. So what? It’s only second for a rookie all-time. First place belongs to Peyton Manning, first pick out of Tennessee, who threw for another 200 plus, getting awfully close to that magical 4,000-yard number right out of the gate. 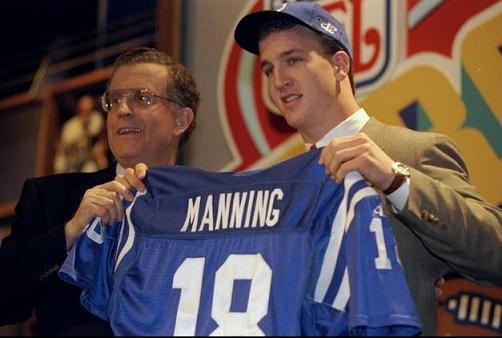 Peyton Manning Would Throw for More Than 3,700 Yards Later that Year

Newton’s off to a better start than Manning’s 302. And Bradford, despite his eight more completions that first game, only recorded 253 yards. With the 422 he put up yesterday, Cam only needs to average about 238 a game the rest of the way to break the 4,000-yard mark.

We’ll have a better idea where Cam is after Week Two’s game against the Green Bay Packers. The Packers sport possibly the best defense in the league – but they looked worse than they should have against Drew Brees and the New Orleans Saints. 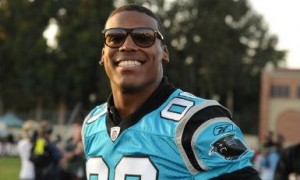 Big Bad Ben Roth was at it again his rookie season, threading the needle with a ballet-like 66% completion percentage. How incongruous. But that’s what he does. Only one time (2009) did Roethlisberger top that percentage, but he’s been one of the more accurate QBs in the league, between 59.7% and 66.6%, his whole seven-year career. 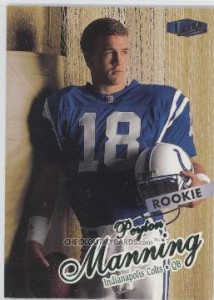 He Passes, He Scores. Manning Has the Most TDs for a Rookie.

Well you drive for show and punch it in the end zone for dough. Manning’s got the record that really counts – 26 touchdowns his first year. He had two his first game, just like Newton. It’s possible Cam can take this down, too, but scoring touchdowns is the hardest thing on this list.

And the Panthers’ strength of schedule is a tad muscley. They’ve got one of the tougher ones actually, against some good teams and stingy defenses. Take a look. To start, the Panthers have to play the Saints and the Falcons twice, and the Bears, Packers, Texans and Lions (don’t laugh). That’s half your games against top 10 defenses.

One thing to note, though. Manning had Marshall Faulk taking away touchdowns. Faulk had 10. Who does Newton have running the ball into the end zone? Mostly he, himself. The underachieving and inconsistent DeAngelo Williams and Jonathan Stewart will hardly get in the way. They had four total TDs between them last season, and none on Sunday.

Now let’s get to the sexy quarterback records that everyone loves, the rushing ones. It’s all about Vince Young here.

Most Rushing Yards for a Quarterback: 552
Vince Young, Tennessee Titans 2006 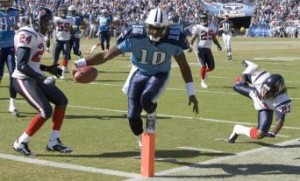 Newton showed some restraint and courage in the pocket against the Cardinals, opting for the pass, when on more than one occasion he could have taken off. That shows a high level of maturity and patience for a player used to having his way on the ground. For Auburn last year, Newton took it to the hole for nearly 1,500 yards.

On Sunday, Cam only posted 18 yards rushing, but he did have eight attempts. Still, it was a balanced offense leaning toward the air: 27 rushes/37 passes.

Expect Newton to run the ball more than your average quarterback this year. He’ll go at least 6-10 times a game. But can he break Vince Young’s record of 552? He’ll need to get moving, literally.

Most Rushing Touchdowns for a Quarterback: 7
Vince Young, Tennessee Titans 2006 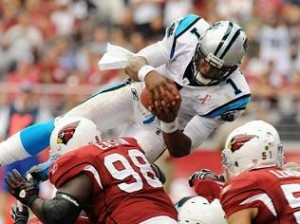 Vince Young also had the most rushing touchdowns for a rookie quarterback. The No. 3 pick out of Texas punched it in seven times. He was no stranger to the end zone, having taken it in for the Longhorns 37 times in three years.

Newton knows his way too. He rushed for 20 touchdowns for the Tigers last year.

Cam added a touchdown on the ground to his statline Sunday. That surpasses Manning’s rookie total of zero. For sure, Cam will surpass Bradford’s one and Roethlisberger’s one (and maybe even Randall Cunningham’s and Steve Young’s five) in their first full seasons, but can he catch up to Vince Young’s seven? Totally possible.

Cam Newton has surely started off on the right “feet.” Look for him to follow in the footsteps of these rookie record holders, at the very least knock on the door of all of these records and certainly win the Offensive Rookie of the Year if he plays half as well as he did in his debut.

OK. OK. Yes, we know. It’s only one game, first-time performances are usually and rightfully poo-pooed, until there’s more evidence. But what a game it was for Cam Newton, and if he doesn’t break these records it sure as hell is going to be fun to watch him try.