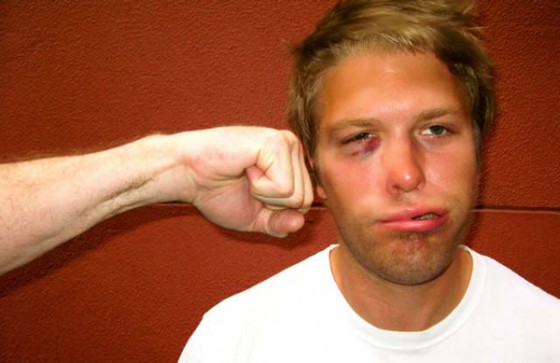 A sucker punch is usually defined as a surprise punch or attack, sometimes executed from behind, on an unsuspecting opponent. In most cases, it’s a bitch move, especially if you’re the one on the receiving end. However, if you happen to be witnessing from a distance, a sucker punch can be quite funny. As is the case in movies. The big screen has produced some memorable blows to the face throughout the years. Here are seven of the very best.

7
Conan vs. a camel
Conan the Barbarian

When Conan wasn’t crushing his enemies, seeing them driven before him, and hearing the lamentations of their women, he was getting shitfaced and punching pack animals in the face. Poor camel. What did it do to deserve this?

Tommy Boy vs. a board
Tommy Boy

Technically, this isn’t really a sucker punch because Tommy taunts Richard into belting him in the mug. However, he wasn’t expecting Richard to pick up a board, so it still qualifies.

Lloyd vs. a chef
Dumb and Dumber

Back when Jim Carrey was funny, he sported a Pete Rose haircut and a chipped tooth and went all Bruce Lee with a chef in one of the zaniest flicks ever made, Dumb and Dumber.

Buck vs. a clown
Uncle Buck

John Candy was one hilarious fat man. Nobody played the cool uncle better. In the following scene, Uncle Buck takes none too kindly to the drunk clown who shows up for his nephew’s birthday party. All clowns should be sucker punched with extreme prejudice.

Clyde vs. The Black Widows
Every Which Way But Loose

Not many actors can play straight man to an orangutan. Clint Eastwood isn’t just anyone though. He pulled it off thanks in large part to his hirsute pal Clyde, who comes in handy when being insulted by a motorcycle gang at a stop light.

After unleashing the most famous “fuck” tirade in the history of cinema, Steve Martin’s Neal Page tries to get a cab from St. Louis to Chicago. A smartass comment to the taxi attendant ends with Neal getting a meaty fist to the grill.

Mongo vs. a horse
Blazing Saddles

Mongo is a tad unstable. Telling him he can’t park his steer in front of the saloon was a bad move. Well, bad for the horse anyway.