If you live in certain areas of the country, it seems like you can’t drive half a mile without passing some sort of animal lawn ornament stuck in the middle of someone’s lawn. Have you ever stopped to wonder what people were thinking when they chose to proudly display said beasts?

What they mean: I’ve never met a goose in real life.

Geese are dicks. This is a well-known fact. Some people actually use them in place of guard dogs. They also poop a lot, so much so that if your darling little geese were real, your yard would look like an explosion happened in a nearby Cocoa Pebbles factory. There is absolutely nothing cute or endearing about them, and no reason they should be depicted wearing old-fashioned hats or sporting bows. 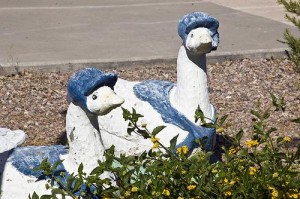 I do say, it’s a lovely day to shit on someone’s lawn.

If you live in any state in which deer/car accidents are common, you’re likely to have a subconscious fear of glimpsing these evil creatures out of the corner of your eye. And the “evil” part is no exaggeration: deer often run into cars just to mess with us. Why on earth would someone want to cause panic by putting effigies of these creatures on their lawns? In some places where deer accidents are common (Maine, for example) something like 50% of people meet their ends in deer-related incidents [citation needed]. Seriously. Deer are more dangerous than heart attacks and cancer combined. 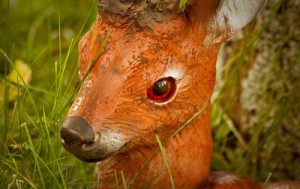 Are you the Key Master?

What they mean: I wish I were a Sim.

Has anyone ever seen pink flamingos on a lawn outside of the Sims? Well, not including Madison, Wisconsin, of course. If you did, the experience would probably cause a variety of thoughts to run through your head. First of all, confusion: are these people hicks, or are they just being ironic? And next, thoughtfulness. Why flamingos? Where did the idea come from in the first place, anyway? Was it part of some sort of pre-internet meme? Finally, morbid curiosity: If I kick it, will it explode? 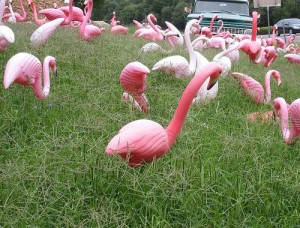 Did someone say something about being filled with dynamite? Guys?

What they mean: You know you think I’m badass.

Okay, so maybe this applies to roadside attractions more than people’s lawns, but still. They need to come up with a new word for how ridiculously great this is. Perhaps “jawsome” or “Rextastic”? Regardless of the amount of time and work put into the dinosaur – and some of these tend to look like something that’s been put together by a distracted four-year old and colored in with the leftover “loser” crayons – there’s nothing quite like the quiet grandeur of a forty-foot prehistoric concrete statue staring at you as you drive past. 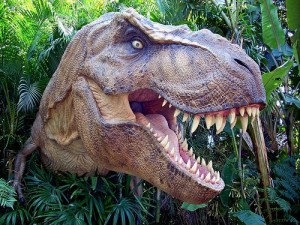 What they mean: I laugh at your stupid tourist ways.

This one also hails from Maine (and other rural places), and is actually quite funny. Some locals will put up a fake owl, and then stand around watching while the tourists driving by careen off the road and leap out with their cameras ready, screaming airheaded phrases such as “Look honey real live wild animals! Yays!” Kudos to you, Mainers, for making tourists just a little more foolish than they already are. And yes, in case you’re wondering, there isn’t a whole lot of stuff to do in Maine. 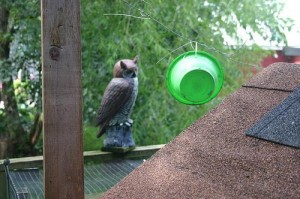 Is real! I swears!

What they mean: My other house is a mansion… If by “mansion” you mean “outhouse.”

Lion statues are known for hanging around outside of zoos, expensive public libraries, and houses that look like they could be expensive public libraries. Having them outside of your house traditionally meant that you were rich enough to have them cast out of solid gold. If you’ve got lions, and your house is none of the above, you’re clearly trying to compensate for something. Just give up already. No one is going to be so impressed by your lions that they miss the fact that you’re living in a dump. 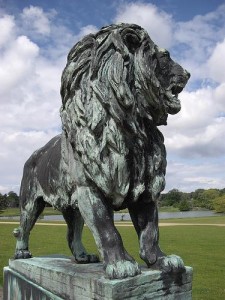 Objects on lawn may be more pathetic than they appear.

What they mean: My neighbor hates my dog.

Okay, so it is true that dogs can cause a problem for lawns. People who have the sign with an x-ed out picture of a dog pooping know this; the peeing dog lawn ornament is the antithesis of this sentiment. In fact, it isn’t surprising to see these warring lawn ornaments in adjacent lawns. Having one of these is like going up to your neighbor and saying, “You know what? I love dogs. I love them so much that I encourage them to urinate on my lawn. Maybe while they’re at it they can stop by your lawn, too.” 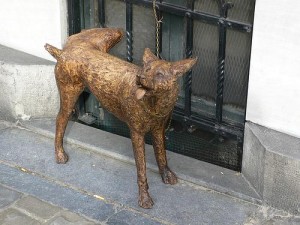