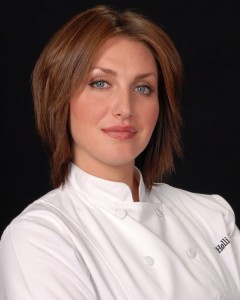 Chef Holli Ugalde, the 24 year old single mother from California won Season 7 of Hell’s Kitchen last night. Her prize? Being named Head Chef of the Savoy Grill in London. Your prize? A gallery of photos of the stunning Chef Holli in order to celebrate her victory. While some are considering her victory an underdog story and a surprise, personally I saw it coming from some of the early episodes. She certainly kept things spicy outside of the kitchen, but her attitude and professionalism in the kitchen never wavered. We’re efforting an interview with Chef Holli for our Podcast, but in the mean time, here is a little taste of the hottest little dish served in Hell’s Kitchen this summer :