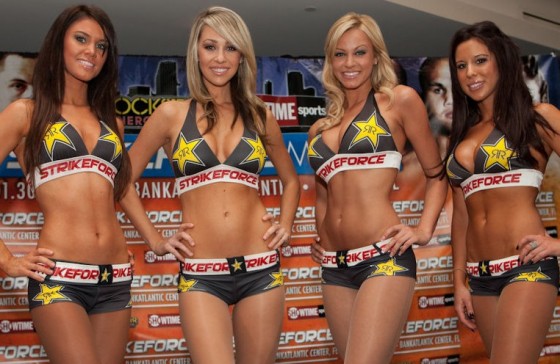 Many reasons to support Strikeforce... here are four.

So, Strikeforce held one of their Challenger cards on Friday night.

It’s okay. I’m sure you were just busy, bragging to all your friends how you had the parlay lock of the playoffs involving the Saints and the Colts. I mean, why would you bother watching MMA when you can boast about how great of a gambler you are….What’s that? The Colts…and Saints…They both? Shit…

Poor degenerate gambling aside, don’t fret. You didn’t really miss much. The card was meh, and about as exciting as consensual sex.

However, the silver lining on the card involved a female scrap between Amanda Nunes and Julia Budd. Wait. Let me rephrase that. It wasn’t so much of a fight as much as it was a girl-on-girl snuff film…

And I loved every second of it.

Nunes went full on beast mode and dispatched of Budd in a mere 14 seconds. 14 seconds… or, roughly the amount of time it took for my first child to be conceived. But let’s be honest, talk is cheap.

Good. Lord. Brutal knockout is brutal. There’s just something sexy about a female who has a well defined Adam’s Apple can kick your ass.