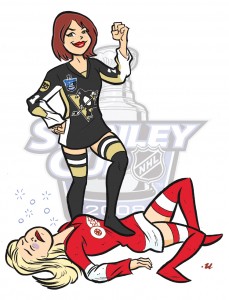 Rob Ullman is an illustrator who enjoys creating some very sexy pictures. He is also a huge fan of hockey and the Pittsburgh Penguins. So naturally the two passions are married together in much of his art. He created the image to the right before the Stanley Cup Finals last season. Obviously that series didn’t turn out how he had hoped. This year Rob was a bit less cocky with his artwork. However it is certainly obvious by looking at his work where his affiliations lie. That doesn’t stop him from creating some excellent work for other teams though. Rob is about to release his latest book of illustrations, entitled Atom-Bomb Bikini, which features 64 hardcover, full-color pages of art. Check out the full gallery of his Hockey illustrations below, and more of his work on his site.