Share Happiness Your Way with Coca-Cola at Burger King

This post brought to you by The Coca-Cola Company. The content and opinions expressed below are that of Gunaxin.

Hashtag activism has been criticized by some as a form of slacktivism, but there are times when it can make a difference. We’ve noticed a recent trend of brands tying hashtags to charitable giving to make a real impact, and we wanted to highlight one that is currently running during the Holidays. Coca-Cola has teamed up with Burger King to help fight hunger with the Share Happiness Your Way campaign:

To help promote this campaign, they’ve produced a special edition 40oz. cup available at your local Burger King. Honestly, the cup isn’t all that spectacular, but it has the ability to do something very powerful if people embrace the hashtag to make a difference. For every dollar donated through Feeding America® and its network of local member food banks, 10 meals will go to help those in need. Feeding America® is the nation’s leading domestic hunger-relief organization.

Use the #ShareHappinessYourWay Hashtag, Burger King and Coca-Cola will donate $1 per to Feeding America!

As you can see above, we enjoyed a Coke and a Whopper at our local Burger King for dinner recently and demonstrated how easy it is to share a photo using the #ShareHappinessYourWay hashtag. Post your own #ShareHappinessYourWay message or photo on Twitter or Instagram, and you can help feed America. While you do not have to have the cup to participate, all posts must include the campaign hashtag in order to qualify. If you’re excited about this opportunity to do some good with your social media accounts like we are, Check out for more information including donation progress and limits! 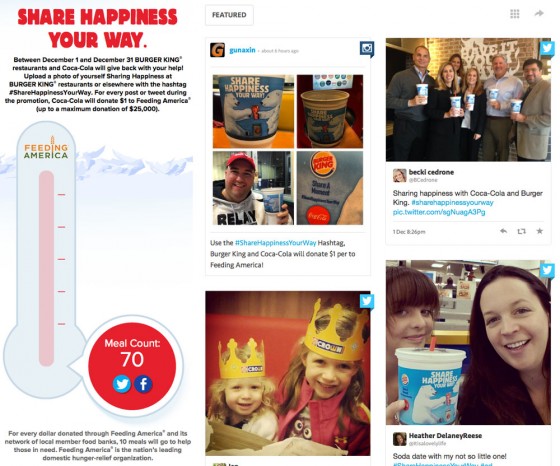