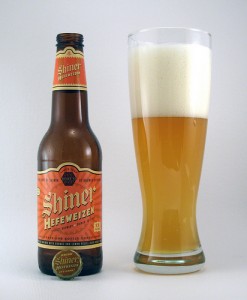 History From Shiner.com : “Hefeweizen (Hef-ay-vite-zen) recalls the classic beers of Bavaria as a true unfiltered wheat brew. This beer captures old-world Munich Malt, wheat grist used in a scant 1% of all brews worldwide, orange and lemon zest in a frothy classic example of bottle-conditioned beer. Adding clover honey and yeast just before it’s bottled touches off a unique, secondary fermentation process inside every keg and bottle before its final release from the brewery.”

The directions are simple: Pour half into a glass, swirl around to loosen the sediment, and pour in the rest as it opens up the flavor and aroma. Well, who am I to argue with the brewers, right? Well, even though I did as prescribed, I really didn’t have any sediment in my bottle, but that did nothing to take away from the crisp, bright aroma alive with honey and citrus. Oh, and hey, look at that! The bottle label even tells you it includes: wheat, orange and lemon peels, and honey! Sneaky. Yeah, it smells like Spring ought to, that’s for sure.

The bright, golden color catches you almost immediately as you bring the Pilsner glass (I really like using a Pilsner-style glass mostly for visual clarity but also because it opens up the flavor and aroma a bit better) to your nose. Right then you really get a hold of the crispness of the citrus and the background of nice, sweet honey. Smell it for a minute , just try to avoid that first sip a moment longer, and just hold onto that Spring outdoor evening…

Sip. Swirl it around your mouth and you instantly get a cloying bit of orange rind and honey which is not all bad, but it does hang around in the back of your throat with a tang similar to a lemonade or orange juice. I’d suggest not brushing your teeth before drinking this one! HA! Anyway, as it caresses your tongue and flows down your throat, it finishes relatively clean (albeit, as I mentioned, with the mucus-y cling -sorry, that’s the best and worst description I can give you).

This beer reminds me so much of a Bell’s Oberon with it’s citrusy appeal (get it?), especially this past year’s Bell’s batch -though not so much this year’s-, and that is, all in all, a fine thing indeed. But, it does lose a little something with it’s throaty hang-on, but at least it isn’t the least bit bitter or hoppy. In fact, it’s not even malty, and that might owe a lot to it’s honey sweetness. A very nice, classic brew for sure.

For an excellent brew with all round citrus notes and a relatively clean finish.