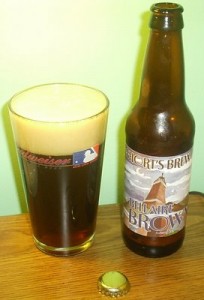 History: A brown ale so rich, it’s hardly classifiable as brown. It’s born of copious amounts of hearty pale ale malt, and several specialty selections which make it a dark, rich and delicious masterpiece. Very light hop additions allow the malty sweetness and flavor complexity to be most protuberant. A beer so user friendly, we dub this the “gateway” beer.

This brown Ale is just about as brown as you can get without stepping into Stout or Porter territory. It’s rich, malty, and slightly creamy in color, and the scent belays that just slightly by being quite bitter and sharply (yet not overtly so) hoppy.

The over-all flavor reminds me a lot of an IPA, as mentioned in the history. Now, I am not a huge fan of IPA most often because of it’s over powering bitterness that, sometimes, makes it literally hard to swallow. This brew, on the other hand, is very nice with a slight bitterness washed away very prominently with a clear, honey-like sweetness. It almost lends itself to a comparison to orange peel and a bit of a pine-y note, and that combination is really nice. Now, on the flip-side, once the flavors open themselves and flow down the throat, there is nothing lingering for an aftertaste, which makes just slightly boring. I enjoy a remainder to carry me on to the next sip, and this Ale just fails there, but it’s not necessarily a complete negative. Very nice all in all.