Sports Illustrated apparently had Danica Patrick’s tramp stamp photoshopped out of her recent photo spread in the Swimsuit issue. While you may debate whether her ink should be considered a “tramp stamp”, since the tattoo is a relatively classy depiction of an American Flag being morphed into a checkered flag, the fact still remains that it is missing from the photos posted online. I first noticed this while viewing the photo shoot video. Compare the two images below (left from Photo, right from Video) 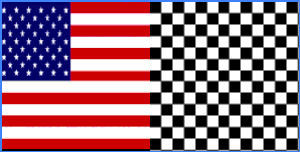 Here are some additional photos of Danica, with and without the Tattoo.

In “researching” for this article, I came across this gem on Wikipedia. Yah learn something every day.

In the United States, they have been pejoratively referred to as “tramp stamps” or “California license plates” in Australia, the Netherlands and Germany as “arse antlers” and in the UK as “slag tags”.

Beyond Danica’s “Arse Antlers”, I can’t help but notice that she looks way hotter in this series of photos than I have ever seen her look before. Looks like there may be some additional photoshop manipulation going on, the type that is way cheaper then surgery. A little air brush here and there, and Danica certainly looks more like a model than a race car driver. Our friends over at Busted Coverage recently noted that something similar happened with Brooklyn Decker’s Calendar. It is interesting that while Sports Illustrated was preparing for the Swimsuit Issue release, they were breaking the story on Alex Rodriguez and steroids. Seems like Rodriguez isn’t the only thing that isn’t 100% real, eh SI?